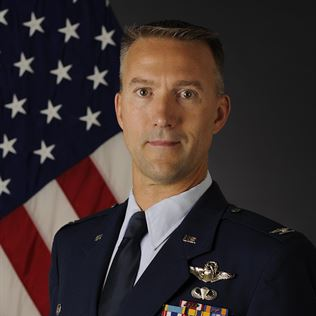 Colonel Jacob Trigler is the commander of the 354th Operations Group, 354th Fighter Wing, Eielson Air Force Base, Alaska. He is in charge of maintaining an 18 million square foot airfield in an arctic environment, directing the execution of RED FLAG-Alaska, and providing the Aggressor enterprise in support of joint and coalition aerial warfare training.

Colonel Trigler is a Command Pilot with over 2,800 flight hours in seven aircraft including 310 combat hours over Afghanistan in the F-15E Strike Eagle.  He has held key positions at the Squadron, Group, and Numbered Air Force levels including Flight Commander, Chief of Foreign Material Exploitation and Test, Operations Officer, Squadron Commander, and Deputy Director of Operations and Plans.  Col Trigler was the first person to be qualified as an F-15E Instructor WSO and then as an F-15E Instructor Pilot.  He was also the first F-15E pilot to be selected to fly with the USAF Aggressor Squadron.

Check out the incredible speaker line-up to see who will be joining Colonel Jacob.