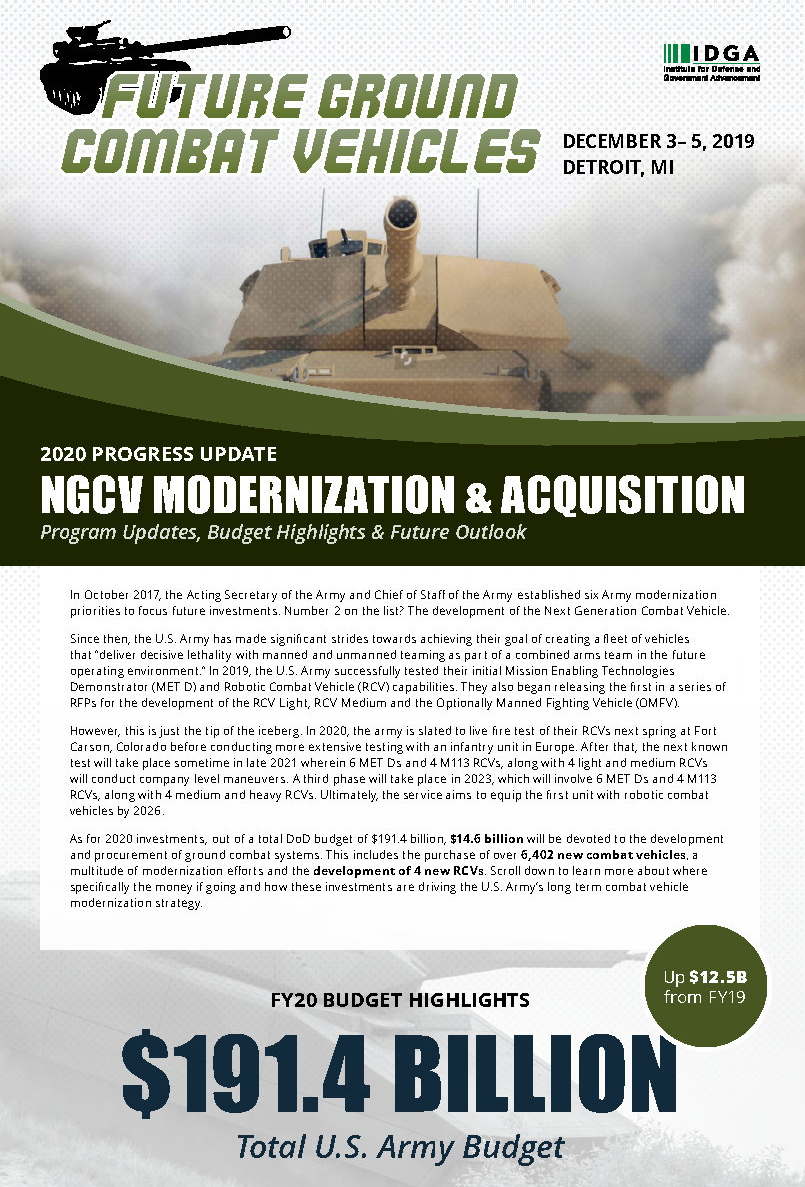 In October 2017, the Acting Secretary of the Army and Chief of Staff of the Army established six Army modernization priorities to focus future investments. Number 2 on the list? The development of the Next Generation Combat Vehicle.

Since then, the U.S. Army has made significant strides towards achieving their goal of creating a fleet of vehicles that “deliver decisive lethality with manned and unmanned teaming as part of a combined arms team in the future operating environment.” In 2019, the U.S. Army successfully tested their initial Mission Enabling Technologies Demonstrator (MET-D) and Robotic Combat Vehicle (RCV) capabilities. They also began releasing the first in a series of RFPs for the development of the RCV-Light, RCV-Medium and the Optionally Manned Fighting Vehicle (OMFV).

However, this is just the tip of the iceberg. In 2020, the army is slated to live-fire test of their RCVs next spring at Fort Carson, Colorado before conducting more extensive testing with an infantry unit in Europe. After that, the next known test will take place sometime in late 2021 wherein 6 MET-Ds and 4 M113 RCVs, along with 4 light and medium RCVs will conduct company-level maneuvers. A third phase will take place in 2023, which will involve 6 MET-Ds and 4 M113 RCVs, along with 4 medium and heavy RCVs. Ultimately, the service aims to equip the first unit with robotic combat vehicles by 2026.

As for 2020 investments, out of a total DoD budget of $191.4 billion, $14.6 billion will be devoted to the development and procurement of ground combat systems. This includes the purchase of over 6,402 new combat vehicles, a multitude of modernization efforts and the development of 4 new RCVs. DOWNLOAD this mega-infographic to learn more about where specifically the money if going and how these investments are driving the U.S. Army’s long-term combat vehicle modernization strategy.