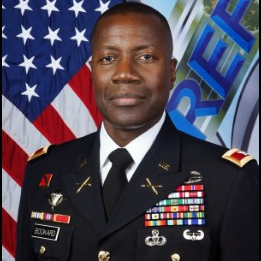 In this role, he is responsible for providing immediate material solutions to support the U.S. Army’s forces employed globally and informs the material development of the future force to meet operational demands.

Prior to this assignment, Colonel Bookard was the Brigade Commander of the 428th Field Artillery Brigade, Fort Sill, Oklahoma. He previously served as the Executive Officer to the Director of the Joint Improvised Explosive Device Defeat Organization (JIEDDO), Office of the Under Secretary of Defense Acquisition Technology and Logistics (OUSD AT&L).

Colonel Bookard is a graduate of the U.S. Army War College, the School of Advanced Military Studies, and the Center for Creative Leadership, Leadership Development Program in Greensboro, North Carolina.

10:00 Guiding Rapid Innovation and Fielding of DE Capabilities across the Army

The Rapid Equipping Force was created in order to realize the need for non-standard equipment needs to meet the demands of new terrain, warfare tactics and their assigned missions. With the main entity focusing on quick reaction capability for getting urgent materiel solutions into the hands of Soldiers, this brief will highlight those efforts across the DE and related electronic warfare fronts.

Check out the incredible speaker line-up to see who will be joining Colonel Joe.