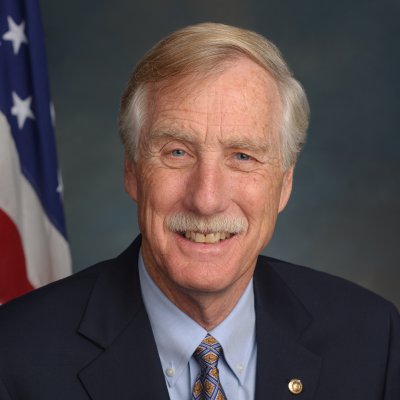 The Commission's Co-Chair, Senator Angus S. King Jr., (I-ME) was appointed to the Commission by Senate Minority Leader Chuck Schumer (D-NY). Senator King was sworn in as Maine’s first Independent United States Senator, filling the same seat once held by storied Maine leaders Edmund Muskie, George Mitchell, and Olympia Snowe. Now in his second term, Senator King is a member of the Armed Services Committee, the Select Committee on Intelligence, the Committee on Energy and Natural Resources, and the Committee on Rules and Administration. In his time in the Senate, Senator King has worked to strengthen America’s national security, conducted critical oversight of the nation’s Intelligence Community, supported common-sense budget priorities that promote prosperity, fought the national opioid and heroin epidemic, coordinated efforts to revitalize Maine’s forest economy, advocated for policies that contribute to cleaner, cheaper energy and mitigate climate change, chaired hearings on the corrosive effect of unchecked money in politics, fought to improve access to health care, worked to strengthen the government’s support of veterans, and promoted increased access to critical community resources like rural broadband. Senator King has already achieved significant legislative victories. In 2013, for example, when students across America faced the financial threat of a significant increase in their student loan interest rates, Senator King spearheaded the effort to draft and pass through both the Senate and House compromise legislation that not only averted rate hikes, but that also put the program on long-term stable financial footing. That hard-fought bipartisan solution, the Student Loan Certainty Act of 2013, has been projected to have saved millions of students across the country more than $50 billion in interest payments over the past five years. In fact, it is in small working groups like this that Senator King has concentrated much of his work. He co-founded the Former Governors Caucus, which brings together the Senate’s former Governors to chart pragmatic approaches to solutions, and is an active member of the Senate Arctic Caucus, which focuses on Maine and America’s growing interest in the Arctic as well as the newly-formed bipartisan climate solutions caucus. Senator King also tries to informally bridge the partisan divide in Washington by frequently bringing his colleagues on both sides of the aisle to his home for barbeque dinners, where the purpose is simply getting to know one another. The bonds that are formed through these relationships often lay the foundation for successful legislation. Senator King also served as the 72nd Governor of Maine, and during his two terms in the Blaine House, he concentrated on economic development and job creation. Then-Governor King also achieved significant reforms in education, mental health services, land conservation, environmental protection, and the delivery of state services. He was re-elected in 1998 by one of the largest margins in Maine’s history.

13:30 Event Keynote Panel Discussion: Developing a Strategic Approach to Defending US in Cyberspace against Cyber Attacks of Significant Consequences: The Role of the US Cyberspace Solarium Commission

Check out the incredible speaker line-up to see who will be joining Angus.