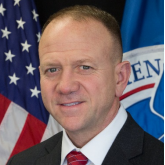 Mr. Haglund serves as Associate Director, Office for Bombing Prevention (OBP), within the Department of Homeland Security (DHS). In this role, Mr. Haglund manages OBP’s programs aimed at building capability among the general public and across the public and private sectors to prevent, protect against, respond to, and mitigate bombing incidents. Additionally, Mr. Haglund coordinates counter-improvised explosive device (IED) efforts across DHS and the Federal interagency. Prior to joining DHS, Mr. Haglund served as the Deputy Chief, Chemical, Biological, Radiological and Nuclear (CBRN) Requirements Support, Joint Requirements Office for CBRN Defense within the Joint Staff, J-8. Mr. Haglund was responsible for developing and integrating CBRND Policy, Doctrine and other non-material solutions through the Joint Capabilities Integration and Development System (JCIDS) and served as a primary advisor to the Chairman of the Joint Chiefs of Staff on matters relating to Countering Weapons of Mass Destruction. From 1990 to 2014, Mr. Haglund served in the U.S. Air Force as an officer in Civil Engineering, Explosive Ordnance Disposal (EOD), and Acquisition Program Management leadership roles. Mr. Haglund commanded a Civil Engineer Squadron at a Data Masked location supporting a research and development organization through the hazardous testing of numerous programs and the execution of presidentially directed missions. Additionally, he served on the Headquarters, US Central Command (CENTCOM) and the Defense Threat Reduction Agency (DTRA) staffs, commanded several large EOD organizations, served two combat deployments in Iraq and was an adjunct faculty member at the George C. Marshall European Center for Security Studies leading courses within the Seminar on Trans-Atlantic Civil Security and the Seminar on Combating Weapons of Mass Destruction Terrorism. As a program manager, Mr. Haglund was assigned to Headquarters, Air Force Special Operations Command, managing the $4.5 billion CV-22 Osprey aircraft acquisition. In addition, he led the associated Special Operations Command Light Strike Vehicle acquisition program. Mr. Haglund is a graduate of Air War College, and holds a Master of Arts in National Security Affairs-Homeland Security and Defense from the Naval Postgraduate School, a Master of Science in Industrial Operations Management from the University of Arkansas, a Master of Science in Business Administration from Central Michigan University, and is an alumnus of the National Defense University, Center for the Study of Weapons of Mass Destruction (WMD), Program for Emerging Leaders. He is a Certified Emergency Manager (CEM) through the International Association of Emergency Managers (IAEM), a Certified Protection Professional (CPP) through the American Society of Industrial Security, a Project Management Professional (PMP), a Master CBRN Military Advisory Team (CMAT) leader through the DTRA Defense Nuclear Weapons School, and holds Defense Acquisition Workforce (DAWIA) Level III program management and Level II life-cycle logistics certifications. Mr. Haglund is married to Nicole Haglund, formerly Nicole Loy, and has three children; Kathryn, Aidan, and Ainsley.

15:30 Enhancing the Nation’s Ability to Prevent, Protect Against, Respond to, and Mitigate the use of Explosives Against Critical Infrastructure

The ever-growing role of critical infrastructure protection has continuously overlapped into the Office for Bombing Prevention’s mission set. This session highlight the efforts that advance the US’ ability to assess and respond to bombing threats.

Check out the incredible speaker line-up to see who will be joining Sean W..