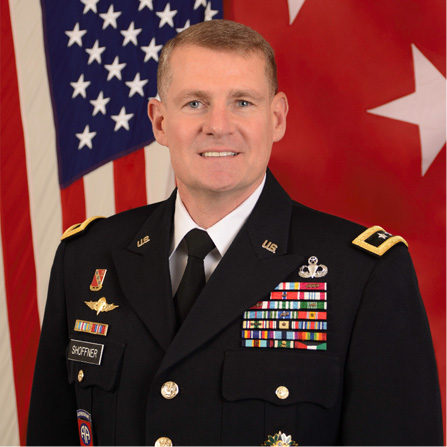 MG Shoffner’s command experience includes: B Battery, 3rd Battalion, 319th Airborne Field Artillery Regiment, 2nd Battalion, 319th Airborne Field Artillery Regiment, and the 18th Fires Brigade. Operational deployments include: Saudi Arabia and Iraq during Operation Desert Shield and Operation Desert Storm, and Afghanistan in 2003 as the Chief of Plans, 82d Airborne Division during Operation Enduring Freedom. As a Battalion Commander, he deployed to New Orleans in 2005 as part of Joint Task Force Katrina, and in 2007 deployed to Baghdad, Iraq where 2-319th was employed as a maneuver task force as part of the “surge” during Operation Iraqi Freedom.

From 2003-2005, MG Shoffner served as the Deputy Chief of Plans for the NATO Allied Rapid Reaction Corps, then located in Rheindalen, Germany. As a Colonel, he served as the Army’s liaison to the U.S. House of Representatives. General Officer assignments include: Deputy Commanding General-Support, 1st Armored Division, Deputy Chief of Staff, G-3/5/7, Army Training and Doctrine Command, and Deputy Chief of Staff-Communications, NATO Resolute Support Mission Afghanistan. He most recently served on the Army Staff in the Pentagon as Director, Army Talent Management Task Force, and Director of Operations, Army Rapid Capabilities Office.

MG Shoffner is married to the former Carron Charney of Lansing, MI and has one daughter, Kristin.

9:00 AM Overview Of The Fires Center Of Excellence Programs, Priorities And Vision For The Future

Check out the incredible speaker line-up to see who will be joining Wilson A..