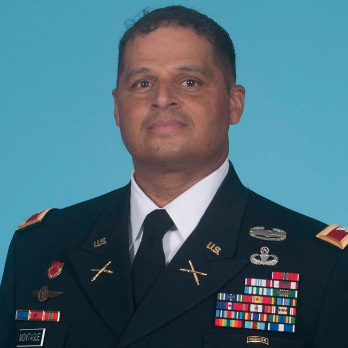 Colonel Montague is the Fires Division Chief in the Force Development section of the Army G-8. Monty is happily married to Major Kyle Meisner (U.S. Army Judge Advocate General) and they are the proud parents of Rylee Flynn (16), Cason Thomas (13), Sarah Kamani (9), and Jacob Tristan (7).  Monty was born and raised in Fishkill, New York and was commissioned as a Field Artillery Officer and a Distinguished Military Graduate from Harvard University in 1995.  He is the only child of Edwin (United States Navy and New York City Fire Department) and Leota Montague (IBM), both deceased.

Colonel Montague most recently commanded the 5th Battlefield Coordination Detachment at Joint Base Pearl Harbor Hickam, where his brigade was responsible for liaison support between the U.S. Army Pacific and the Pacific Air Forces, as well as joint interoperability across the Indo-Pacific. He has had operational assignments in the 2nd Infantry Division, Republic of Korea, the 18th Field Artillery Brigade, the 18th Airborne Corps Artillery, the 82nd Airborne Division, the 3rd Infantry Division, and the 25th Infantry Division. Monty commanded a self-propelled field artillery cannon battery out of Fort Stewart, Georgia during the initial invasion of Operation Iraqi Freedom in 2003 and a towed airborne artillery battalion at Fort Bragg, North Carolina from 2012 to 2014.  Monty has deployed twice to Iraq, most recently in 2008-2009, twice to Afghanistan, most recently in 2015-2016, and to Kosovo in 2001.

Colonel Montague is also a school-trained Army planner and his key staff assignments include Future Operations Planner for the 25th Infantry Division, Executive Officer for the 2nd Battalion, 35h Infantry Division, Campaign Plan Designer for the U.S. Army Pacific, and Governance Planner for Regional Command South, Afghanistan. He also previously served as an Observer/Controller/Trainer, Artillery Team Chief, and Executive Officer at Ft. Lewis, Washington where he trained National Guard Battalions for deployments to Iraq, Afghanistan, and Guantanamo Bay, Cuba.  Monty also served as the Fires Officer for the Joint Special Operations Command and simultaneously as the Chief of Plans for the Aviation Tactics and Evaluation Group.

Colonel Montague has an undergraduate degree with honors in English and American Literature, a Masters in Military Operational Art, Science, and Strategy from the School of Advanced Military Studies at Fort Leavenworth, Kansas, and a Masters in Strategic Studies as a Distinguished Graduate from the Army War College at Carlisle, Pennsylvania.  His publications include his monograph, “The Army and Team Learning,” and an article titled “Building the Pentathlete Mind,” both through the Combined Arms Center.

Colonel Montague has the awards and decorations commensurate with his rank.

His hobbies include youth sports coaching, reading, board games (chess, checkers, and competitive Chutes and Ladders, and more recently, Ticket to Ride), and avidly supporting the New York – Yankees, Giants, Knicks, and Rangers, as well as all 41 Harvard sports teams

Check out the incredible speaker line-up to see who will be joining Colonel Kareem P..