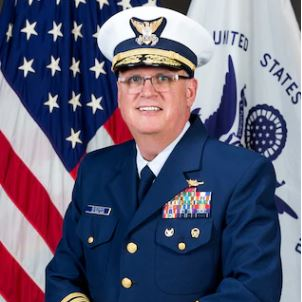 Vice Admiral Scott A. Buschman assumed the duties of the Coast Guard Deputy Commandant for Operations in June 2020. In this capacity, he is responsible for the development of operational strategy, policy, guidance, and resources that address national priorities. This oversight of Coast Guard missions, programs, and services includes: intelligence; international affairs; cyber; the maritime transportation system; commercial regulations and inspections; search and rescue; maritime security; law enforcement; defense operations; environmental response; contingency planning; and the operational capabilities of cutter, boat, aviation, shore, and deployable specialized forces. Prior flag officer assignments include Atlantic Area Commander, headquartered in Portsmouth,VA, where he served as the operational commander for all Coast Guard missions from the Rocky Mountains to the Arabian Gulf, spanning across five Coast Guard Districts and 40 states. He also served as the Deputy Commander of Atlantic Area and the Commander of the Seventh Coast Guard District, headquartered in Miami, Florida, where he was responsible for all Coast Guard operations in the Southeast United States and the Caribbean Basin including Florida, Georgia, South Carolina, Puerto Rico and the U.S. Virgin Islands and Commander Force Readiness Command. His first flag assignment was the Commander of Coast Guard Force Readiness Command. As a Cutterman, Vice Admiral Buschman served as a Deck Watch Officer aboard USCGC SHERMAN, Navigation Officer in Charge aboard USCGC ESCANABA, Boston, MA and Commanding Officer aboard USCGC VASHON. His other operational assignments include Deputy Commander, Coast Guard Group Key West and Commander, Coast Guard Sector Key West. Previous staff assignments include: Coast Guard’s Deputy Assistant Commandant for Capability, Coast Guard Seventh District’s Chief of Staff, Executive Assistant to the Deputy Commandant for Operations, Program Reviewer at Coast Guard Headquarters Office of Programs, Liaison Officer to the U.S. Department of State, Chief of Congressional Hearings Section, and Deputy Chief of the Office of Budget and Programs. Vice Admiral Buschman holds a Bachelor of Science degree in Civil Engineering from the U.S. Coast Guard Academy; a Masters of Public Administration from The George Washington University; and a Masters of Business Administration from the Massachusetts Institute of Technology as part of the Sloan Fellows Program. He is originally from Peterborough, New Hampshire, and received his commission in 1984 after graduating from the United States Coast Guard Academy. Vice Admiral Buschman’s personal awards include the Coast Guard Distinguished Service Medal, six Legions of Merit, five Meritorious Service Medals, three Coast Guard Commendation medals, the Transportation 9/11 Medal, the Coast Guard Achievement Medal, and the Commandant’s Letter of Commendation as well as various service and unit awards.

11:30 Vision for a Future USCG: An Operational Perspective for a 21st Century USCG

Tasked with the Coastal and Maritime Defense of our Nation’s border, the United States Coast Guard has a unique capability needs across the maritime operating domain. The delivery of the 2018 US Coast Guard plan outlines the near-term initiatives the USCG is taking today in order to maximize readiness today and tomorrow in order to address the Nation’s complex maritime challenges anytime, anywhere.

Check out the incredible speaker line-up to see who will be joining Vice Admiral Scott.