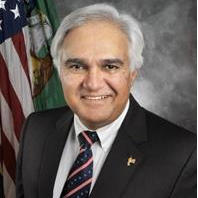 Mr. Bhagowalia has over 33 years of senior technical, managerial, and executive leadership experience in private industry, the U.S. Government, and state government. He has used his knowledge of information resource management, cybersecurity, and business process re-engineering to transform and secure organizations, and has worked on such White House initiatives as open data, cloud, and data center programs. Prior to coming to CBP, he served as the Senior Advisor on Technology and Cybersecurity, in the Commissioner’s Office, at the Bureau of the Fiscal Service, U.S. Department of Treasury.

Mr. Bhagowalia has received numerous awards from the U.S. Government and Industry, including a Presidential Rank Award for Meritorious Executive Service; three Federal 100 Awards; and White House Champion of Change. His team won the Chief Information Officer 100 award for data.gov; and “Best of the Web” State Portal award from Center for Digital Government (CDG) for Hawaii.gov. He was inducted into the Boeing Technical Excellence Fellowship Program, recognizing the top one percent of engineers and scientists in the Boeing Company; the 2015 National Defense University Information Resources Management (IRM) College Hall of Fame; and 2014 Federal Enterprise Architecture Certification Institute Hall of Fame.

Mr. Bhagowalia has a Bachelor of Science Degree in Electrical Engineering (EE) and a Master of Science (MS) Degree in EE from Louisiana State University, and an MS in IRM from Syracuse University. He is also a twice-distinguished graduate from the National Defense University, with an IRM Diploma and Federal CIO Certificate.

Check out the incredible speaker line-up to see who will be joining Sonny.