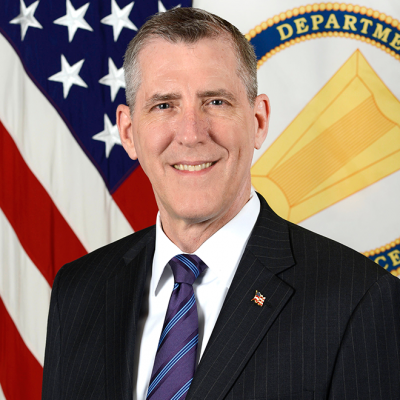 Mr. Glenn D. Krizay assumed the office of Director, Defense Forensics and Biometrics Agency on June 1, 2017. He is responsible for assisting the Provost Marshal General in executing his DoD-level biometrics and forensics executive agent functions on behalf of the Secretary of the Army. He leads the organization in addressing strategic policy matters associated with biometrics and forensics across the full spectrum of DoD mission sets as well as its partnerships with United States agencies, departments and international allies. He oversees the operation of DoD's authoritative biometrics database and its daily interaction with other identity systems to enhance national security.

Prior to joining DHS, Mr. Krizay served as Director, Office of Enforcement Analysis, Department of Commerce. Working in coordination with other Bureau of Industry and Security offices, his office conducted screening and evaluations of documents and databases to identify actual or potential violations of the Export Administration Act, and implemented export Administration Regulations.

Mr. Krizay is retired from the United States Air Force after twenty-six years of honorable and faithful service. He had several assignments providing intelligence support to operational units, to include serving as the Director of Intelligence for Joint Task Force - Southwest Asia supporting Operations Southern Watch and Enduring Freedom; and Deputy Director of Intelligence for Central Air Forces during Operation Iraqi Freedom. He served in a number of United States Air Force and Joint staff assignments in intelligence resource management, system architectures, and plans and policy development.

A native Ohioan, Mr. Krizay graduated from the University of Akron with a Bachelor of Science in Political Science. He received a Masters in Human Resource Management from Central Michigan University and a Masters in Strategic Studies from the U.S. Army War College.

In order to support multiple critical DHS mission sets, it is critical to continuously advance identity intelligence activities, including the utilization of biometrics and forensics.

Check out the incredible speaker line-up to see who will be joining Glenn.