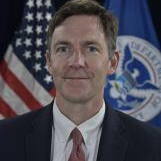 Brian Murphy is the Principal Deputy Under Secretary for the Office of Intelligence and Analysis. In that role, he advises and assists the Under Secretary and is responsible for the conduct of key intelligence activities supporting the Department of Homeland Security; State, Local, Tribal, Territorial and Private Sector partners; and the Intelligence Community, including: intelligence collection, production, dissemination, watch and warning, watch-listing and partner engagement. He also serves as the Deputy Chief Intelligence Officer for DHS.

Prior to this selection, he served as the Acting Principal Deputy for Intelligence and Analysis. Before joining DHS, Mr. Murphy was responsible for the Federal Bureau of Investigation’s national level counterterrorism programs, intelligence sharing within the intelligence community and state and local law enforcement. In this role, he developed and implemented the FBI’s counterterrorism program, including policy and budget development, training, and the buildout of several pilot field offices.

Mr. Murphy was appointed into the Senior Executive Service in 2016. He earned a Bachelor of Arts in Government from the College of William & Mary, and a Master’s degree in Islamic studies from Columbia University. He is also a veteran of the U.S. Marine Corps.

Check out the incredible speaker line-up to see who will be joining Brian.