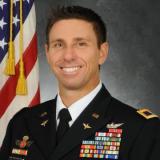 COL Richard Haggerty is a native of San Diego, California.

COL Haggerty graduated with honors from the U.S. Army Command and General Staff College and honors from the U.S. Naval War College. He has Masters Degrees in Procurement Management and National Security and Strategic Studies, as well as a Black Belt in Lean Six Sigma. He is married to the former Kimberly Way of New Jersey, and they have two sons: Nicholas and Maverick.

Check out the incredible speaker line-up to see who will be joining Richard .