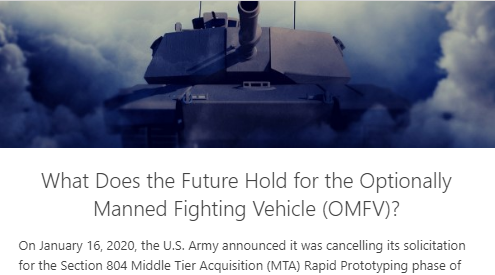 What Does the Future Hold for the Optionally Manned Fighting Vehicle (OMFV)?

On January 16, 2020, the U.S. Army announced it was canceling its solicitation for the Section 804 Middle Tier Acquisition (MTA) Rapid Prototyping phase of the Optionally Manned Fighting Vehicle (OMFV) after it received only one bid. This marked the DoD's 3rd failed attempt to successfully develop a replacement for the Cold War-era Bradley. However, the story is far from over. Download this in-depth, 10-page report to learn more about where the OMFV program is headed. 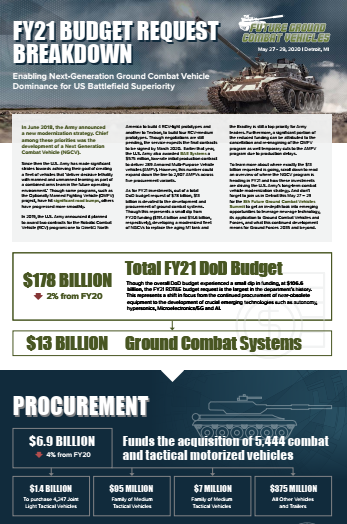 In June 2018, the Army announced a new modernization strategy. Chief among these priorities was the development of a Next Generation Combat Vehicle (NGCV). Since then the U.S. Army has made signiﬁcant strides towards achieving their goal of creating a ﬂeet of vehicles that “deliver decisive lethality with manned and unmanned teaming as part of a combined arms team in the future operating environment.” Though some programs, such as the Optionally Manned Fighting Vehicle (OMFV) project, have hit significant road bumps, others have progressed more smoothly.

As for FY21 investments, out of a total DoD budget request of $78 billion, $13 billion is devoted to the development and procurement of ground combat systems. Though this represents a small dip from FY20 funding ($191.4 billion and $14.6 billion, respectively), developing a modernized fleet of NGCVs to replace the aging M1 tank and the Bradley is still a top priority for Army leaders. Furthermore, a significant portion of the reduced funding can be attributed to the cancellation and re-imagining of the OMFV program as well temporary cuts to the AMPV program due to production delays. To learn more about where exactly the $13 billion requested is going, DOWNLOAD our latest infographic to read an overview of where the NGCV program is heading in FY21 and how these investments are driving the U.S. Army’s long-term combat vehicle modernization strategy.