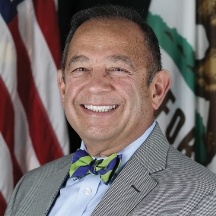 Dr. Imbasciani was commissioned in the Medical Corps of the United States Army in December, 1986 and retired after 27 years in 2014 with the rank of colonel. He has deployed four times in support of the wars in the Gulf, and received the Meritorious Service Award, the Combat Medic badge, the Army Commendation Medal (four times) and California Order of Merit. Campaign ribbons include Operation Desert Storm; the Liberation of Kuwait; and Global War against Terrorism (both expeditionary and service).

Dr. Imbasciani has practiced urologic surgery in Los Angeles since 1991, and with Kaiser Permanente since 1997. He is presently the Past President of the Los Angeles County Medical Association and the past President of the California Urologic Association. He was a member of the California Medical Association's Board of Trustees for ten years. He also served on the Board of the Southern California Permanente Medical Group (Kaiser Permanente) from 2003-2013, and was its Director of Government Relations from 2007-2015.

Governor Edmund J. Brown appointed Dr. Imbasciani as the 16th Secretary of the Department of Veterans Affairs in September, 2015, and he was confirmed by the State Senate several months later. A member of the Governor's Cabinet, he also serves on the Board of the California Housing Finance Agency, the Vietnam Veterans Memorial Honor Committee, and the Governor's Military Council.

Dr. Imbasciani received a masters and doctorate in musicology at Cornell University, and was awarded a Fulbright Fellowship to Rome, Italy to write his doctoral dissertation. He has visited over 80 countries on five continents, speaks seven languages and loves traveling to new places.

Check out the incredible speaker line-up to see who will be joining Vito D..