May 18 - 20, 2020 | Washington D.C.
Sponsor
View The Agenda
Purchase Pass
The speaker LTG (R) Mark Hertling was part of the previous event. To review the most recent speakers list, click here. 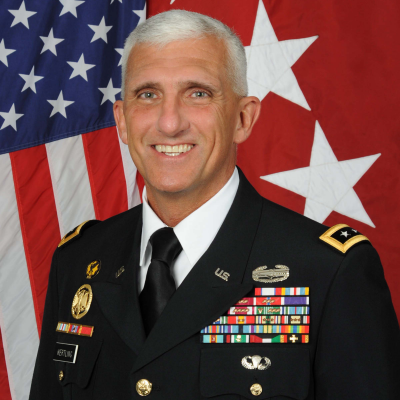 Leaving his beloved US Army in January 2013, Lieutenant General (retired) Mark Hertling recently served as a Senior Vice President at the innovative Florida Hospital in Orlando from 2013-2017, and he now serves as an advisor to the Advent Health Leadership Institute.  He designed and still teaches a physician and healthcare strategic leadership development program at that organization, as well as teaching at other healthcare and educational institutions.  His book, Growing Physician Leaders, was published in May 2016.

Hertling received a Bachelor of Science from the U.S. Military Academy in 1975, and he is also a graduate of the Army's Staff College, the School of Advanced Military Studies, and the National War College. He holds Masters’ Degrees in Military Arts and Science and National Security Studies from these institutions, and he also earned a Masters’ Degree in Kinesiology from Indiana University’s School of Health Science. In 2019, he received a Doctorate in Business Administration from the Crummer School of Business at Rollins College, defending a thesis addressing leadership in the healthcare industry.

Before retiring from the military, Mark served for 38 years in the US Army as a tanker and cavalryman.  He finished his Army career as the Commanding General of US Army Europe, where he led over 60,000 soldiers and partnered with the armies of 50 countries in the European theater and the Levant.  He also commanded the Army’s 1st Armored Division (1AD) in Germany and in Northern Iraq during the surge, was an assistant Division Commander in Baghdad in 2003-4, and he commanded training organizations at the Army’s National Training Center (Ft Irwin, California) and the Joint Multi-National Training Center (Grafenwoehr, Germany).  Hertling commanded at every level from platoon to field army.

During his career, Mark received many military honors.  Included in the list are three awards of the Distinguished Service Medal, six awards of the Legion of Merit, five Bronze Stars, a Purple Heart, and the Army Commendation Medal for Valor as well as the Gold Cross of Honor of the German Army, the Romanian Land Forces Emblem of Honor, and the Polish Soldier’s Medal of Honor.  He is a life member of the Purple Heart Association, Phi Kappa Phi, and in 2012 the Boy Scouts of American recognized him as a Distinguished Eagle Scout.  In 2015 he received the Dwight D. Eisenhower Award from the US Sports Academy as well as the Des Cummings Award for Innovation for his Physician Leadership Program from Advent Health.

Upon retiring, LTG Hertling was appointed by President Obama to be one of 25 members of the President’s Council on Fitness, Sport and Nutrition from 2014-2017.  He still serves as an advisor to the non-profit organizations “Mission: Readiness” in California, “Operation Gratitude” in Washington DC, he is an adjunct scholar at West Point’s Modern War Institute, and he is often seen on CNN as a military and national security analyst.

Mark is married to his best friend, Sue. They have two sons, and five grandsons.  He loves being with family, reading history, bicycling, and any form of athletic activity

Check out the incredible speaker line-up to see who will be joining LTG (R) Mark.