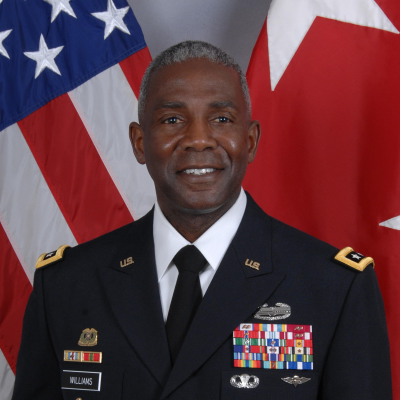 Lieutenant General Darrell K. Williams is the Director of the Defense Logistics Agency, with headquarters in Fort Belvoir, Virginia. He provides strategic leadership for the Defense Department’s combat support agency for worldwide logistics. LTG Williams directs nine supply chains supporting the U.S. military, as well as federal, state, local and international partners. DLA provides food, medical material, uniforms and construction equipment, 98 percent of the Defense Department’s fuel, and the majority of spare parts for military weapons systems. He oversees the National Defense Stockpile, an international network of 25 distribution centers, and the Department’s process for reverse logistics. He leads a global, expeditionary workforce of over 25,000 military and civilians.

LTG Williams is a native of West Palm Beach, Florida. He is a Distinguished Military Graduate of the Hampton Institute ROTC Program and was commissioned into the Army Quartermaster Corps in 1983. LTG Williams is a graduate of the Army Command and General Staff College (CGSC), the School of Advanced Military Studies (SAMS) and a Distinguished Graduate of the National War (NWC) College. He earned a Bachelor of Arts Degree in Psychology from Hampton Institute, Hampton, Virginia and Master’s degrees in Military Arts and Sciences, National Security and Strategic Studies, and Business Management (Logistics).

9:15 AM Allocating Resources And Advancing Innovation To Support Logistic Efforts

Check out the incredible speaker line-up to see who will be joining Lieutenant General Darrell K..