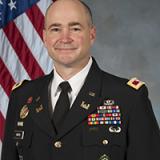 Colonel Adrian A. Marsh was commissioned as a second lieutenant in the Army Corps of Engineers in 1994 upon graduation from the United States Military Academy at West Point, New York. In 1995-97, Colonel Marsh served as a Platoon Leader, Maintenance Platoon Leader, and Executive Officer with the 63rd Engineer Company, and then as the Assistant Operations Officer with the 36th Engineer Group at Fort Benning, Georgia. He joined the 16th Engineer Battalion at Giessen, Germany in 1999, serving as the Battalion S-4 and deploying with the unit to Kosovo in support of Operation Joint Guardian. Upon return from deployment, he worked as the Assistant Brigade Engineer for 1st Brigade, 1st Armored Division prior to assuming command of A Company, 16th Engineers in 2001. His first acquisition assignment was in 2004 as a assistant project manager for the Army's Knowledge Online program. In 2005, he deployed as the military lead to an interagency cell overseeing reconstruction program resources with the Combined Forces Command-Afghanistan in support of Operation Enduring Freedom. He returned to the Program Executive Office, Enterprise Information Systems, to lead the forward deployment of the Army Knowledge Online servers to Kuwait. In 2007, he joined the US Army Rapid Equipping Force serving as a project officer at Fort Belvoir, Virginia and forward sites in Iraq and Afghanistan. In 2009, he served as the Tactical Radio Systems Coordinator under the Assistant Secretary of the Army for Acquisition, Logistics, and Technology. He deployed in 2010 in support of Operation New Dawn as a project leader for the transition of the Iraqi police assistance mission from United States Forces-Iraq to US Embassy Baghdad. Upon return from theater, he served as the Special Assistant to the Director of the Army Staff, and then as the Acquisition Advisor to the Vice Chief of Staff, Army. From 2013 to 2016, Colonel Marsh led the Army’s Nett Warrior Program as the Product Manager for Ground Soldier Systems. Under his tenure, the program fielded over 7,000 systems, supported multiple unit rotations to Iraq and Afghanistan and made significant advancements to the Army’s dismounted tactical network. He attended the U.S. Army War College from 2016-17. Colonel Marsh is a graduate of the United States Army Airborne, Air Assault, and Ranger schools. He holds a BS in Environmental Engineering from the United States Military Academy, an MS in Environmental Engineering from the Missouri University of Science and Technology, and an MS in Systems Engineering from the University of Maryland, College Park.

Check out the incredible speaker line-up to see who will be joining Colonel Adrian.