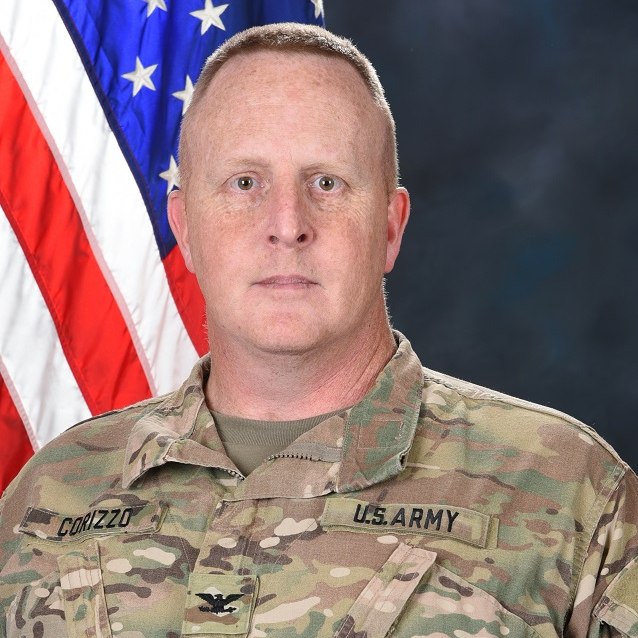 Col. Chris Corizzo was commissioned in 1994 as a lieutenant in the U.S. Army Ordnance Corps with a branch detail to the Infantry.

At Fort Wainwright, Alaska, he held positions as a rifle platoon leader and rifle company executive officer. Transitioning to the Ordnance Corps, he returned to Alaska and served as the deputy support operations officer and maintenance control officer, 46th Support Battalion.

In 2008, he was designated the logistics officer, and then the support operations officer, 2/25 Stryker Brigade Combat Team.  In 2010, he was again assigned as an observer trainer as the sustainment warfighting function chief for Operations Group Alpha.

A station move in 2013 brought Col. Corizzo to Joint Base Lewis-McChord, Washington, where he assumed command of the 296th Brigade Support Battalion, 3rd Brigade, 2nd Infantry Division. He later served with U.S. Army South with duty at U.S. Southern Command in Miami.  There he performed duties as the liaison officer to the combatant command and later deployed to Operation Resolute Support, serving as the executive officer to the deputy advisor to the Afghan Minister of Defense.  In September 2017, he assumed his current duties leading the Sustainment Division, Army Capabilities Integration Center, Fort Eustis, Virginia.

Col. Corizzo is happily married to his college sweetheart Hope. They have two children.

Check out the incredible speaker line-up to see who will be joining Colonel Christopher.