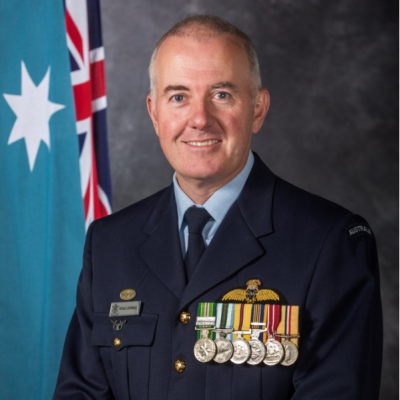 WGCDR O’Donnell is the current Commanding Officer of 76 Squadron, RAAF Base Williamtown. 76 Squadron is responsible for the conduct of introductory fighter training for all RAAF fighter aircrew prior to their conversions onto the F/A-18F, E/F-18G or F-35A. The Squadron also conducts adversary support for units across the ADF.

WGCDR O’Donnell joined the Royal Australian Air Force in 1989. Since then he has accumulated over 6 000hrs flying time with tours on F-111, Hawk, Macchi, and PC9 aircraft. He also flew the GR-4 Tornado while on exchange with the RAF which included several tours during the Iraq conflict (Operation Iraqi Freedom in US parlance).

In his current role as Commanding Officer of 76 Squadron, WGCDR O’Donnell has overseen the transition to the upgraded Hawk 127 aircraft as a lead-in fighter platform. This transition was multi-facetted including an increased use of simulation, multiple new technologies enabling better learning outcomes and a high focus on individual performance.

In January 2020, WGCDR O’Donnell is posted to a second command, that of the Central Flying School. CFS is responsible for all instructor training and standardisation within the RAAF.

WGCDR O’Donnell is married to Gill; together they have two children, Ben and Hannah. His interests include all things technology, mountain biking and enjoying good food.

Wing Commander O'Donnell will provide an overview of emerging flight training and education priorities for the Royal Australian Air Force to include emerging technology, and innovation opportunities of interest.

Check out the incredible speaker line-up to see who will be joining Wing Commander Neville.