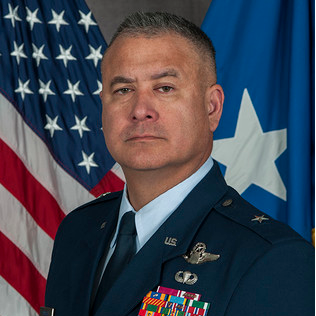 Brig. Gen. Floyd W. Dunstan is Assistant Adjutant General – Air and Commander of the Colorado Air National Guard. He is the principle advisor to The Adjutant General of all Colorado Air National Guard matters.  General Dunstan is responsible for the mission readiness and operational effectiveness across a broad spectrum of programs and activities involving over 1600 military personnel serving at four locations within Colorado.  In this role, General Dunstan oversees development of operationally trained, equipped, and mission ready forces in support of national defense requirements and emergency response, relief, and recovery operations throughout Colorado. Additionally, General Dunstan is dual-hatted as the ANG Assistant to USAF Recruiting Service. In this role, he ensures all ANG units have the resources and information available to succeed in elements of marketing, resources, and Recruiting and Retention operations.

General Dunstan was commissioned a Second Lieutenant in the United States Marine Corps upon graduation from the United States Air Force Academy in 1987. He served as an F/A-18 pilot, instructor pilot, squadron Weapons and Tactics Instructor, and as a MAWTS-1 F/A-18 Instructor. He joined the Colorado Air National Guard in 1998 as a Traditional Guardsman and has served throughout the Colorado Air National Guard at the squadron, wing, and headquarters level. General Dunstan commanded the 120th Fighter Squadron in 2008 and led the squadron on a combat deployment during Operation Iraqi Freedom. Prior to his current assignment, he was the 140th Wing Commander.  General Dunstan is a command pilot with more than 4100 hours in the F-16, F/A-18, and F-5 and 350 combat hours flying in Operations NORTHERN WATCH and IRAQI FREEDOM.

Legion of Merit with one oak leaf cluster

Check out the incredible speaker line-up to see who will be joining Lieutenant General L. Scott.