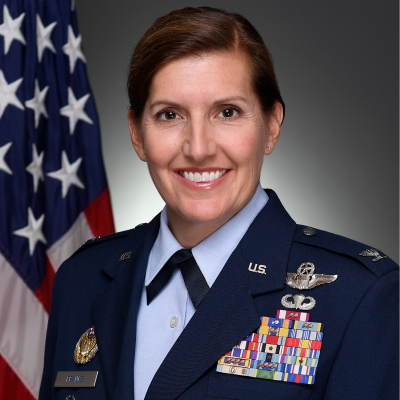 female pilot to land in Iran since 1979 for earthquake relief in 2003. Col Franks time in Little Rock earned her the Airlift Wing CompanyGrade Officer of the Year, 21 Air Force Aircrew Excellence Winner for the first Air Mobility Command Iraq landing, and the Airlift Tanker Association Young Leader Winner for 2004. She then served as a T-37 and T-6 Formal Training Unit Instructor Pilot at Vance AFB, Oklahoma. Col Franks served as a T-37 Flight Commander, T-6 Check Flight Commander and Flight Evaluator, and the Squadron Executive Officer.

In 2007, Col Franks transitioned from the active duty to serving in the Air Force Reserve at Pope Field, North Carolina as a C-130H2 Aircraft Commander in the 95th Airlift Squadron. Additionally, for two years she held the position of Wing Director of Staff during the airfield and base transition to a tenant of Fort Bragg. Following that assignment, she was an Air Officer Commanding at the United States Air Force Academy where she was responsible for motivating, training, and developing cadets into officers of character. Prior to this assignment, Col Franks served as the Deputy Chief Operator Engagement Talks Branch where she advised senior leadership on Air Force interests supporting multinational operations, interoperability and enhance coalition warfighting with foreign militaries. Most recently Col Franks served as the Chief, Strategic Airlift and OSA Programming for the Reserve Command, Headquarters Air Force at the Pentagon.

Check out the incredible speaker line-up to see who will be joining Colonel Deanna.