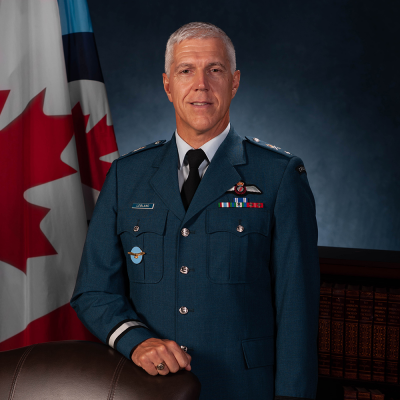 Brigadier-General Mario Leblanc was born in Vanier, Ontario. He joined the Canadian Armed Forces in 1983 under the Regular Officer Training Plan and graduated in 1988 from the Royal Military College of Canada, Kingston with a Bachelor degree in Mechanical Engineering.

Upon completion of his Air Combat Systems Officer course in 1989, BGen Leblanc was posted to 405 Maritime Patrol Squadron in Greenwood, Nova-Scotia. He completed his tour at 405 Squadron in 1994 and was then posted to the Canadian Forces Air Navigation School in Winnipeg where he became an instructor for the Basic / Staff Air Navigator Course, as well as Standards Officer.

In 1998, BGen Leblanc proceeded to the Canadian Forces School of Aerospace Studies to attend the Aerospace Systems Course.  Upon graduation in 1999 he was promoted to the rank of Major and was posted to Ottawa to work within two project offices; firstly, for the Project Management Office for Quality of Life, and in 2000 he moved on to the Project Management Office Aurora where he was the manager for the Aurora main avionics systems components upgrade.

He left Ottawa in 2003 to return to flying duties with 407 Squadron in Comox for three years. Upon completing his second flying tour in 2006 as the Squadron Deputy Commanding Officer, he was selected to attend the Advanced Command and Staff College course in the United Kingdom, where he obtained a Master of Arts with Merit in Defence Studies and was promoted to Lieutenant-Colonel. He returned to Canada in the summer of 2007 and was employed for one year at NDHQ within the directorate of Air Force Readiness for the Chief of the Air Staff.

In 2008, BGen Leblanc returned to Comox to take command of 407 Long Range Patrol Squadron where he oversaw the Squadron's preparations, training and flying operations in support of security for the Vancouver 2010 Olympics. In the summer of 2010, he moved to Colorado Springs where he was employed for one year in the Plans, Policy and Strategy Division of NORAD HQ. Promoted Colonel in 2011, BGen Leblanc was appointed the Combined Aerospace Operations Centre director at the 1 Canadian Air Division headquarters in Winnipeg.

In July 2012, BGen Leblanc arrived in Cold Lake and took over command of the Aerospace Engineering Test Establishment (AETE) and was nominated the Flight Test Authority for the RCAF. After 22 months as the Commanding Officer of AETE, he went on to Haiti in June 2014 where he was the Commander of the Canadian Task Force Port-au-Prince and the Chief of Staff for the military component of the United Nations Stabilization Mission in Haiti (MINUSTHA). After 13 months deployed, he returned to Canada in July 2015 and was appointed as the Canadian Joint Operations Command (CJOC) J5 Plans Officer.

Promoted in 2016 to his current rank, BGen Leblanc was appointed Deputy J3 U.S Pacific Command, in Pearl Harbor, Hawaii, where he served for two years until appointed as Commander, 2 Canadian Air Division in August 2018.

In order to provide efficient and mission-ready capable Royal Canadian Air Force members, it is imperative to pay close attention to their specific education and training needs to make the biggest impact on overall operational readiness. Brigadier General Leblanc will provide an in-depth viewpoint as to emerging and future RCAF training priorities and needs.
-Supporting initiatives to bolster RCAF individual education and training
-Training tools and systems of interest to RCAF
-RCAF developmental courses to support training management

Check out the incredible speaker line-up to see who will be joining Brigadier General M..