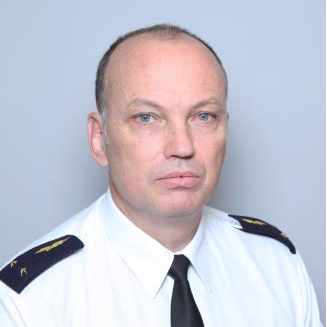 Deputy Chief of Staff for Procurement The French Air Force

After three years in the Academy, he is awarded with fighter pilot wings in December 1989.

In 1990, he is posted at the 3/5 COMTAT VENAISSIN Fighter Squadron in Orange (Mirage 2000C). He is promoted to Captain in 1992. During this period, he takes part to many international operations over Iraq and Bosnia.

In 1995, he is posted to Canada as pilot in the 433rd Tactical Fighter Squadron based in BAGOTVILLE (Quebec) to fly the CF-18 Hornet. He is promoted to Major in 1998.

Back in France, he joins the Directorate for Strategic Affairs as a staff officer in charge of prospective, R&D, missile defense and weapons.

In 2000, he attends the 8th promotion of the Joint War College in Paris.

In 2004, he is posted at the Directorate for Finance in the MoD as deputy head of bureau in charge of joint equipment programs until September 2006. He is promoted to Colonel in 2006.

He becomes then Military Assistant to the French Air Force Chief of Staff, General ABRIAL.

In April 2008, he is posted in the Pentagon (Washington, DC) as liaison officer to the Chief of Staff of the US Air Force Strategic Studies Group “Checkmate”. He is the only French officer in the Pentagon.

From 2011 to 2013, he is posted in the Joint Staff as part of the office in charge of Strategy and Prospective for the Vice CHOD.

He is promoted Brigadier General on the 1st of June 2017.

As of September 2018, he is Deputy Chief of Staff for procurement of the French Air Force

He is promoted Major General on 1st March 2019.

He flew more than 2800 hours and 73 combat missions over hostile territories.

12:30 PM France’s Vision For The Future And It’s Perception Of Current Allied Cooperation

Check out the incredible speaker line-up to see who will be joining Major General Frederic.