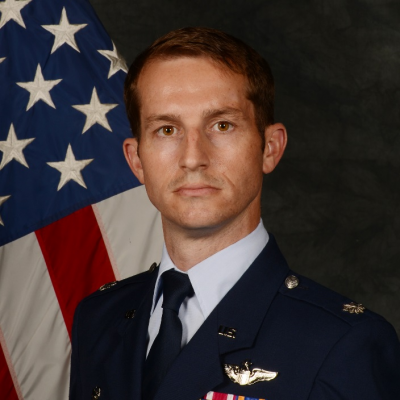 Lieutenant Colonel Michael P. Richard is the Commander of the 480th Fighter Squadron, Spangdahlem Air Base, Germany.  Lieutenant Colonel Richard is responsible for the unit’s F-16 aircraft and personnel for the only OCA SEAD Block 50 F-16 squadron within HQ USAFE-AFAFRICA.  The squadron stands ready to support NATO and combatant commanders with offensive and defensive counter-air combat airpower.

Lieutenant Colonel Richard received his commission through the Reserve Officer Training Corp program at The University of Notre Dame in 2002.  Lieutenant Colonel Richard has held numerous positions within the F-16 fighter pilot career field to include: Instructor Pilot, Flight Examiner, Flight Commander, Director of Staff, Weapons and Tactics Officer, Assistant Director of Operations, and Director of Operations.  He earned a Master’s Degree in Public Administration at the Harvard Kennedy School as part of the Chief of Staff of the Air Force Scholar’s Program, and is a graduate of the U.S. Air Force Fighter Weapons School.  Lieutenant Colonel Richard is a senior pilot with more than 2,000 flying hours.  He has flown 98 combat sorties totaling 498 combat hours in support of operations Iraqi Freedom, New Dawn, and Unified Protector.

2002 Bachelor of Arts, Government, University of Notre Dame IN

Order of Daedalians Air Force Exceptional Pilot of the Year, 2010

Meritorious Service Medal with One Device

Check out the incredible speaker line-up to see who will be joining LIEUTENANT COLONEL MICHAEL P..