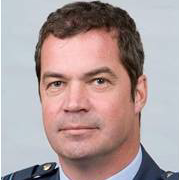 Colonel Bertil van Geel (1965) is F-16 pilot in the Netherlands Air Force with over 3000 flying hours in total with various operational and staf postings. In the ‘90’s he did an exchange tour with the German ‘Luftwaffe’ on the PA-200 Tornado. From 2004-2007 he was Squadron Commander (LtCol) of 312SQ at Volkel Airbase.

His flying career includes operations in Former Yugoslavia (1998) as the RNLAF/BAF F-16 Operations Officer and in Afghanistan (2005 and 2006) as the RNLAF F-16 Detachment Commander.

His academic career includes the Netherlands Advanced Command and Staff College (2003-2004), the USAF ‘School of Advanced Air and Space Studies’ (SAASS) at the Air University in Alabama (2007-2008), NATO Defense College in Rome (2012) and the Dutch Interdepartmental Management Course.

In 2010 he was promoted to colonel when he became associate professor for Airpower at the Netherlands Defense Academy in Breda. He ended his tour at the NLDA in 2013. His publications include ‘The Netherlands Air Force in the Post Cold War Era’ and ‘Operation Unified Protector Libya’ and ‘Unmanned Aerial Vehicles’ in the Netherlands Military Spectator.

From 2013 until 2016 he was posted at NATO Headquarters in Brussels Belgium, at the Permanent Military Representation of the Netherlands, dealing with NATO Operations, Training & Exercise, Military Intelligence and NATO Command Structure.

From 2016 until June 2018 was posted at the Netherlands Ministry of Defense as the Head of the Military Strategic Element at the Directorate of Operations.

As of June 2018 he is appointed as the Netherlands Air Attaché / Deputy Defense Attaché in the United States of America.

Colonel Van Geel married in 1992 with his wife Carin and has 2 children, Alexander (1993) and Rebecca (1995). His hobbies are tennis, skiing, travelling and cars.

Check out the incredible speaker line-up to see who will be joining Colonel Bertil.