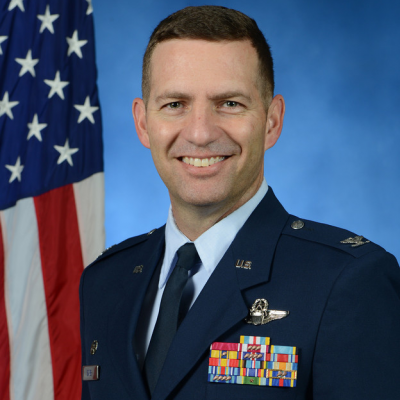 Colonel Davis earned his commission through ROTC from Texas A&M University in 1996. He attended Undergraduate Pilot Training at Sheppard AFB, TX, where he was the Distinguished Graduate and winner of the AETC Commander’s Cup Trophy. Following pilot training, Colonel Davis attended F-15C Basic Course training at Tyndall AFB, FL, where he was also the Distinguished Graduate and winner of the 1999 Francis S. Gabreski Award for the top USAF fighter Basic Course graduate. He graduated from the USAF Weapons School in 2004 as a Distinguished Graduate and later returned as a Weapons School Instructor and Chief Instructor Pilot in the F-15C. After transitioning to the F-22, Colonel Davis served as a Wing Chief of Safety, Operations Officer, F-22 Fighter Squadron Commander, and deployed to Southwest Asia as the 525th Expeditionary Squadron Commander. In 2015, Col Davis became the 325th Operations Group Commander, Tyndall Air Force Base, FL, which is responsible for training and projecting unrivaled F-22 Air Dominance to Combatant Commanders world-wide. Colonel Davis is a command pilot with more than 2,300 hours in the F-15C and F-22.

Check out the incredible speaker line-up to see who will be joining Col Robert.