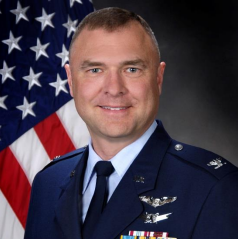 Colonel Garry A. Haase is the Commander and Director for the Munitions Directorate, Air Force Research Laboratory, Eglin Air Force Base, Florida.

Colonel Haase entered the Air Force in 1993 as a distinguished graduate of the Air Force Reserve Officer Training Corps, Missouri University of Science and Technology, Rolla, Missouri. He served in a broad variety of engineering positions performing technical intelligence, space launch, flight test engineering, and advanced munitions research duties. He also held staff assignments as an action officer and program element monitor in the Assistant Secretary of the Air Force (Acquisitions) Directorate of Special Programs and while deployed as a joint action officer with the Office of Security Cooperation—Iraq. More recently as a program manager, he served as Materiel Leader for Small Diameter Bomb I, Chief of V-22 Joint Development, and as acting Senior Materiel Leader/System Program Manager of the CV-22. Prior to his current assignment, he served as Chief, Current Operations Division, Headquarters Air Force Materiel Command. Colonel Haase holds Department of Defense Acquisition Corps Level III certifications in Program Management, Test and Evaluation as well as Systems Planning, Research, Development and Engineering

Check out the incredible speaker line-up to see who will be joining Col Garry.