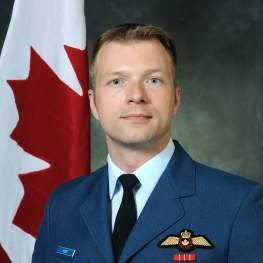 Born in Vancouver, British Columbia in January 1975, Colonel Pletz joined the Canadian Armed Forces (CAF) in June 1993 as a student pilot. He studied at Royal Roads Military College in Victoria, British Columbia and at the Royal Military College of Canada in Kingston, Ontario where he earned a Bachelor’s degree in Materials Science in 1997. After graduating, he received pilot training in Moose Jaw, Saskatchewan and received his wings in 1998. He was subsequently selected to fly CF-18 Hornet fighters.

In June 2000, at the end of CF-18 training in Cold Lake, Alberta, he was promoted to Captain and posted to 425 Tactical Fighter Squadron in Bagotville, Quebec. In 2004, he was selected as the CF-18 National Air Demonstration Pilot, where he had the honor of representing the dedication and professionalism of the Royal Canadian Air Force and the Fighter Force.

In 2005, he graduated from the Fighter Weapons Instructor Course (FWIC) as a Mass Attack Lead. In 2006, he was posted to 3 Wing Operations in Bagotville where he assumed the position of Chief of Combat Readiness Training.

Promoted to Major in January 2007, he was posted for the second time to 425 Tactical Fighter Squadron where he successively held the positions of Squadron Operations Officer and Squadron Weapons and Tactics Officer. In 2009, he was appointed to the position of Officer Commanding FWIC. Later that year, he was selected as Executive Assistant for the Commander 1 Canadian Air Division in Winnipeg, Manitoba. In 2010, he was nominated to attend the Joint Command and Staff Program (JCSP 37) at the Canadian Forces College in Toronto, Ontario.

Promoted to Lieutenant-Colonel in June 2011, he was posted to the Eastern Air Defense Sector (EADS) in Rome, New York, USA as Commander of the Canadian Detachment. He also held the position of Deputy Director of Operations.

In June 2013, he was posted to Bagotville as 3 Wing Operations Officer. He deployed to Eastern Europe in May 2014, where he took command of 425 ETAC at Câmpia Turzii, Romania, and subsequently took Command of the Operation Reassurance Air Operational Task Force (ATF). Under his command, the ATF moved from Romania to Šiauliai, Lithuania and carried out the NATO Air Policing Mission in the Baltic States from September 2014 to January 2015.

In June 2015, he was posted to 1 Cdn Air Div, Winnipeg, Manitoba as Senior Staff Officer Air Force Standards. In June 2017, he was promoted to his current rank and posted to Ottawa, Ontario as Director of Fighter Capability Transition and Integration.

Over the course of his career, he has accumulated more than 2,500 flying hours on high-performance military aircraft, including more than 2,000 hours on the CF-18.

Colonel Pletz is married to Caroline Simard, a native of La Baie, Quebec, and they are the proud parents of Jacob and Matthew.

Check out the incredible speaker line-up to see who will be joining Col David.