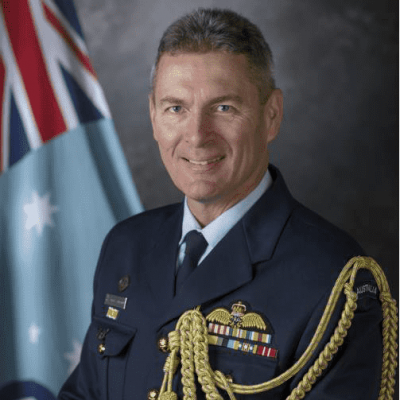 Terry joined the Royal Australian Air Force in 1986 as a direct entry pilot, and first flew DH4 Caribou tactical transport aircraft. He rerolled to fast jets in 1991 and has subsequently served with all four Australian Classic Hornet (FA18A/B) Squadrons. He completed Fighter Combat Instructor (FCI) course in 1997, and conducted instructional tours at 2 Operational Conversion Unit and No. 77 Squadron. In 2003, he led No. 75 Squadron operations during Operation FALCONER (Iraqi Freedom), for which he was awarded a Distinguished Service Medal (DSM) for his ‘exceptional leadership in warlike operations’.

As a Wing Commander, van Haren commanded No. 3 Squadron (FA18A+) at RAAF Base Williamtown between 2009 and 2011. He was promoted to Group Captain in 2012 and served two years as Director Air and Space Operations Centre at HQ Joint Operations Command. In 2014, he served as a Battle Director in the 609th Combined Air and Space Operations Centre (CAOC). In 2015, he was appointed Officer Commanding No. 78 Wing with the responsibility to train and develop fighter aircrew and technicians. During this tour he transformed fighter aircrew training with the introduction of performance coaching and the framework for the Fighter Fit program.

In June 2017, TVH was promoted to Air Commodore and he had the privilege to Command the Australian Air Task Group for Operation OKRA (Inherent Resolve).

Terry is married to Rhonda, a registered nurse, and they have three teenage sons. He enjoys swimming, surfing, skiing and is a keen Elvis fan.

Check out the incredible speaker line-up to see who will be joining Air Commodore Terry.