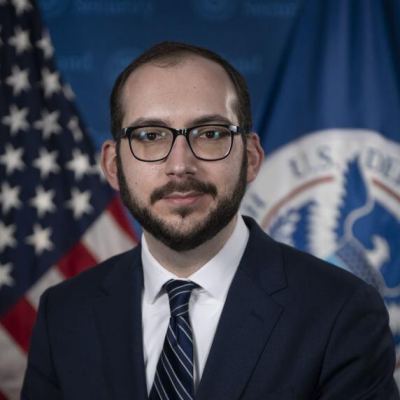 Eric Hysen was sworn in as the Chief Information Officer (CIO) for the Department of Homeland Security (DHS) on Feb. 1, 2021. As CIO, Mr. Hysen is responsible for strategically aligning the Department’s Information Technology (IT) personnel resources and assets, including security, infrastructure, and delivery, to support core DHS missions and activities. Mr. Hysen most recently served on the Biden-Harris transition’s Technology Strategy & Delivery team, working to develop the administration’s plans to leverage technology and delivery in support of policy priorities. He previously was a Senior Fellow at the National Conference on Citizenship, where he led projects to use technology, data, and design to address pressing public policy challenges. He also worked in state government, helping to launch the California Office of Digital Innovation, and in philanthropy, supporting nonprofits working to advance immigration and criminal justice reform. Mr. Hysen previously served as the Executive Director of the Department of Homeland Security Digital Service. In that leadership role, his teams worked to transform DHS’ most critical services by bringing top software engineering, product management, and design talent from the private sector to partner with innovators inside government. DHS Digital Service projects included immigration benefits processing, refugee admissions, and international trade. Prior to joining DHS, Mr. Hysen was a founding member of the U.S. Digital Service in the White House. Before government, he worked as a software engineer and program manager at Google. Mr. Hysen graduated with honors in Computer Science from Harvard University and has published research in crowdsourcing and workflow design.

The DHS is consistently a leader on harnessing the latest information technologies. This session will look to how the DHS plans to leverage technology to better protect the homeland and support essential functions throughout the agency.

Check out the incredible speaker line-up to see who will be joining Eric.