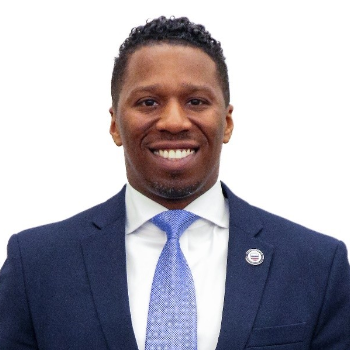 Donell Harvin currently serves as the Chief of Homeland Security and Intelligence for the District of Columbia, Homeland Security and Emergency Management Agency (DC HSEMA), where his primary focus is to integrate emergency preparedness, and intelligence information collection, analysis, and dissemination throughout the National Capital Region (NCR). As Chief of HSEMA's Homeland Security Division, he serves as the Executive Director of the National Capital Region Threat Intelligence Consortium (NTIC), the District’s Fusion Center. In this role he assures that his team provides tactical and strategic intelligence (collection, analysis and dissemination) to support local and federal law enforcement agencies, first responders, homeland security, emergency management, public health and the private sector stakeholders. Additionally, he chairs the District's School Safety Alliance, a consortium of safety professionals charged with the protection of students in public, charter, private and parochial schools. The Homeland Security Division also hosts the District's Interfaith Preparedness Group (IPAG), a multi-faith work group working towards the safety and security of houses of worship across the District. Dr. Harvin was formerly the Administrator for Emergency Management and Health and Safety for the Office of the Chief Medical Examiner in the District of Columbia. In addition to overseeing routine occupational health and safety and forensic field operations for the office, he functions as the agency’s lead on disaster and emergency management-related planning and response. In this capacity he is the District of Columbia’s lead on mass fatality management planning and response. He is a subject-matter expert in response to large-scale disasters, continuity of operations and performing special and complex forensic death investigations. As the former Chair of the Metropolitan Washington Council on Government’s (MWCOG) Fatality Management Workgroup, he led the regional effort for preparing for mass fatality incidents in the National Capital Region (NCR). Prior to coming to DC, Dr. Harvin served for four years as the Deputy Director for the New York City (NYC) Medical Examiner’s Special Operations and Special Investigations Division, where he was tasked with overseeing disaster response, and special forensic operations. This includes overseeing multiple mass fatality incident responses, as well a several large-scale World Trade Center 9/11-related sifting operations for human remains. Previous to this post, he was the Chief Industrial Hygienist for the NYC Department of Health (NYC DOH) Bureau of Environmental Emergency Preparedness and Response (BEPR), where he served as the lead scientist for the Radiation Response Unit and Environmental Response Group and served as the project lead on NYC's BioWatch program. He has a broad Hazardous Materials (HazMat) response, industrial hygiene, occupational health and safety and health physics background. He is also a leader in the fields of public health preparedness and EMS response, having served as a NYC paramedic for over 20 years, an Emergency Preparedness Coordinator for multiple NYC hospitals, and as a director for the NYC Pediatric Disaster Coalition.

The first step in developing effective response strategies for threats is gathering actionable intelligence. However, coordination of intelligence across various agencies and law enforcement is a constant challenge. This session will look at the ways that fusion centers across the country are developing effective strategies for information sharing to better protect the homeland.

Check out the incredible speaker line-up to see who will be joining Donnell.