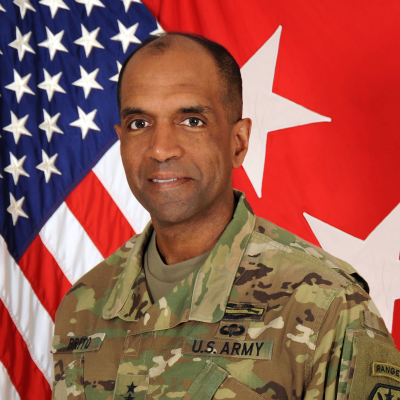 MG Brito is a graduate of the Infantry Officer Basic and Advanced courses, Airborne and Ranger Schools, Combined Arms Staff Services School, Command and General Staff Officers Course, and Senior Service College at the Joint Advanced Warfighting School (JAWS), Norfolk, Virginia. He holds a Bachelor of Science degree in Community Studies from Penn State University, a Master’s degree in Human Resource Management from Troy State University, and a second Master’s degree in Joint Strategy and Campaign Planning from the Joint Advanced Warfighting School. He is also a graduate of the MIT Seminar XXI Program.

As the MCoE is the primary driver for material and concept development for the maneuver force, the Command will play a critical role in advancing the Next-Generation Combat Vehicle initiative.
-Developing maneuver concepts that complement future NGCV operations
-MCoE Priorities as it relates to NGCV initiative
-Global threat environment and its affect on MCoE mission set

Check out the incredible speaker line-up to see who will be joining Major General Gary M..