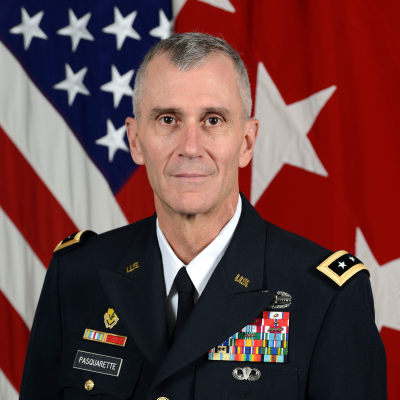 Lieutenant General Pasquarette was commissioned as a second lieutenant armor officer in the U.S. Army upon his graduation from Furman University in 1983. His first duty assignment was 1st Battalion, 13th Armor in lllesheim, West Germany. As a captain, LTG Pasquarette served in 1st Cavalry Division in G-3 Operations, as the 1st Brigade logistics officer, and as a tank company commander in 2nd Battalion, 8th Cavalry Regiment. His company subsequently deployed as a Cohesion Operational Readiness Training (COHORT) unit to the Republic of Korea and became part of 1st Battalion, 72nd Armor Regiment, 2nd Infantry Division. Upon completion of company command, LTG Pasquarette spent two years as a staff officer in the Strategy, Plans and Policy Directorate, Office of the Deputy Chief of Staff, G-3, on the Army Staff in Washington, DC. He

From 2005-2007, LTG Pasquarette commanded 1st Brigade, 4th Infantry Division at Fort Hood, Texas, and in Iraq. Following his attendance at the Army War College, he served as executive officer to the Chief of Staff of the Army followed by an assignment as Deputy Commanding General (Support) for 4th Infantry Division (Mechanized) at both Fort Carson, Colorado, and Iraq. Upon his return from Iraq, LTG Pasquarette served as Director, Comprehensive Soldier Fitness, prior to becoming the Deputy Director, Program Analysis and Evaluation Directorate, Headquarters, Department of the Army, G-8.

His most recent assignments were as Chief of Staff, United States Army Pacific, from July 2013 to August 2014; Deputy Commanding General of U.S. Army Pacific Command at Fort Shafter, Hawaii; and as Commander, U.S. Army Japan from July 2015 to July 2018. He assumed his present duties in August 2018. His awards and decorations include the Distinguished Service Medal, Legion of Merit, Bronze Star, Defense Meritorious Service Medal and Meritorious Service Medal. He has earned Master's degrees from Harvard University, U.S. Army Command and General Staff College, and the Army War College.

LTG Pasquarette hails from Florida. He and his wife, Liz, have three sons, two of whom serve in the Army and the other is a sophomore at in high school.

11:15 AM Strategic Overview of Resourcing Efforts and Impact on Advancement of Ground Combat Vehicle Fleets

Check out the incredible speaker line-up to see who will be joining Lieutenant General James F..