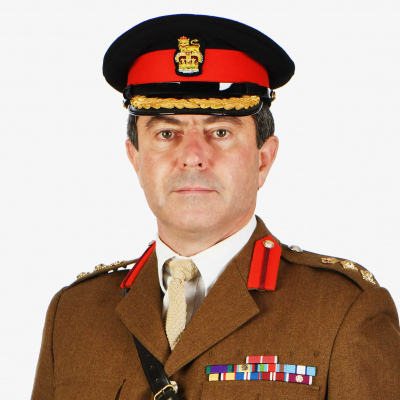 Colonel Eamonn Welch OBE was commissioned into the Royal Regiment of Artillery in 1988.  His early service was spent in Germany during the Cold War with 26th Field Regiment Royal Artillery and at Tidworth with 1st Regiment Royal Horse Artillery, deploying on operations in Northern Ireland, the ‘First Gulf War’ in 1991, and with UNPROFOR Bosnia in 1994.

Following Advanced Command and Staff College, he was SO2 G4 Ops at HQ Land, responsible for the deployment, sustainment, and recovery of forces on operations in Kosovo, East Timor, Mozambique, Sierra Leone, and for the response to the Foot and Mouth epidemic and the Fuel Protests.  He then commanded 3rd/29th (Corunna) Battery in 4th Regiment Royal Artillery in Germany, in Cyprus with UNFICYP, Northern Ireland, and England (Fire Strike).  After a post at the Combined Arms Tactical Trainer (Battle Group simulation facility) at Warminster, he was Second in Command of 1st Regiment Royal Horse Artillery converting the Regiment to the Infantry ground-holding Battle Group role and deploying with it for a challenging operational tour in Iraq in 2007.

On promotion, he became the SO1 Joint Fires Operations at HQ ARRC at Rheindahlen.  He then assumed the role of SO1 J3 Joint Effects at PJHQ, Northwood, during which he planned and executed several plans for operations in Libya in 2011 (Op ELLAMY/UNIFIED PROTECTOR).  At the end of this tour he was made an OBE.  An equally interesting tour working across Whitehall from the MOD Operations Directorate as SO1 Targeting in Military Strategic Effects followed.  A brief return to the Army, and a rewarding foray into Capability Development for the Royal Artillery, culminated in promotion to colonel.  He is currently the Assistant Chief of Staff (Plans) at the Standing Joint Force HQ at Northwood.  He assumes the post of Assistant Head Joint Effects in the Ground Manoeuvre Capability branch at Army HQ in early September 2019.

Married, he has two children at university, and a bichon-frisé ‘dog.’  He particularly enjoys history and has had an article published recently on the sinking of HMS Paragon in 1917 in the academically-renowned ‘Mariner’s Mirror.’ He has now given up hockey, but enjoys skiing, the benevolence of friends and family for occasional game shooting, and would love to find the time to become a more-qualified offshore sailor.

Check out the incredible speaker line-up to see who will be joining Colonel Eamon.

4:15 PM The Latest Programs And Leading Priorities Of The British Army In Face Of Rapid Advancement Of Near-Peer Capabilities