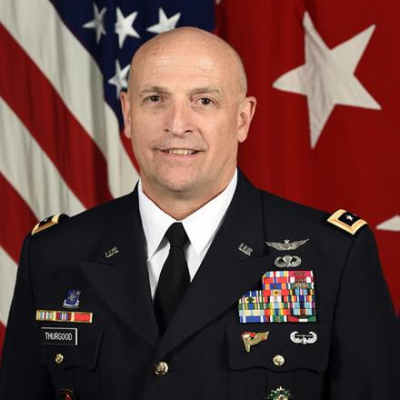 Director of Army Rapid Capabilities and Critical Technologies Office (RCCTO) Office of the Assistant Secretary of the Army (Acquisition, Logistics and Technology)

Lieutenant General L. Neil Thurgood is the Director for Hypersonics, Directed Energy, Space and Rapid Acquisition, Office of the Assistant Secretary of the Army (Acquisition, Logistics and Technology), Redstone Arsenal, Alabama. He assumed duties in March 2019.

In this position, LTG Thurgood is responsible for the rapid fielding of select capabilities to deter and defeat rapidly modernizing adversaries, including overseeing development of an Army Long

LTG Thurgood most recently served as the Director for Test, Missile Defense Agency, Redstone Arsenal, Alabama. LTG Thurgood most recently deployed from 2017-2018, when he served as Deputy Commander, Combined Security Transition Command-Afghanistan, Operation Resolute Support/Operation Freedom’s Sentinel. Prior to his deployment, he served as the Deputy for Acquisition and Systems Management, Office of the Assistant Secretary of the Army (Acquisition, Logistics, and Technology), in Washington, D.C.

LTG Thurgood enlisted in the U.S. Army in 1983. Following his commissioning in 1986 as an Aviation Branch Officer, he served in multiple company grade and battalion aviation positions in both the U.S. and overseas, including multiple combat deployments. LTG Thurgood was then selected and served in the 160th Special Operations Aviation Regiment (Airborne) as a Platoon Leader, Operations Officer and Company Commander.

After transitioning into the Army Acquisition Corps in 1995, he served in various program offices for conventional and special programs. As a Project Manager, LTG Thurgood served in the Utility Helicopters Office, and as a Program Executive Officer, LTG Thurgood led the PEO for Missiles and Space, at Redstone Arsenal, Alabama. LTG Thurgood participated in operations supporting Operation Enduring Freedom in Afghanistan and Operation Iraqi Freedom in Iraq.

8:00 AM Keynote: Directed Energy – An Overview of a Technology That is a Threat and a Solution

• Addressing DE as a counter technology in the face
of hypersonics, UAS and future threats
• Overviewing the latest developments in the field
and readiness for full deployment
• Integrating DE weapon systems into Army
components

Check out the incredible speaker line-up to see who will be joining Lieutenant General Neil.