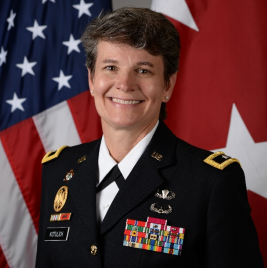 Major General Kotulich, is the Chief of Staff of U.S. Transportation Command, Scott Air Force Base, Illinois. She is responsible for the development of plans, policies, and procedures to ensure efficient operation and seamless interface between headquarters staff, component commands, and subordinate organizations. She oversees command policy and programs which support the Combatant Commander’s mission to project and sustain military power globally in order to assure our friends and allies, deter potential adversaries, and if necessary, respond to win decisively.

MG Kotulich received her commission in 1990 as a second lieutenant in the U.S. Army after graduating from the United States Military Academy at West Point with a Bachelor’s of Science Degree in Political Science. She also holds a Master’s Degree of National Resource Strategy from the National Defense University.

She has served in several joint positions to include assignments at the Defense Logistics Agency, North East Philadelphia, Pennsylvania; Defense Logistics Agency, Fort Belvoir, Virginia; and at the Headquarters Deployment Distribution Operations Center, Kuwait. Her awards include the Legion of Merit, Bronze Star Medal, the Parachutist Badge, and Air Assault Badge. (Current as of June 2019)

Check out the incredible speaker line-up to see who will be joining Major General Deborah L..

Major General Kotulich, Chief of Staff of U.S. Transportation Command will provide a senior-level look into the efforts to modernize USTRANCOM Logistics practices in order to provide a more efficient and streamlined means to project and sustain military power globally.