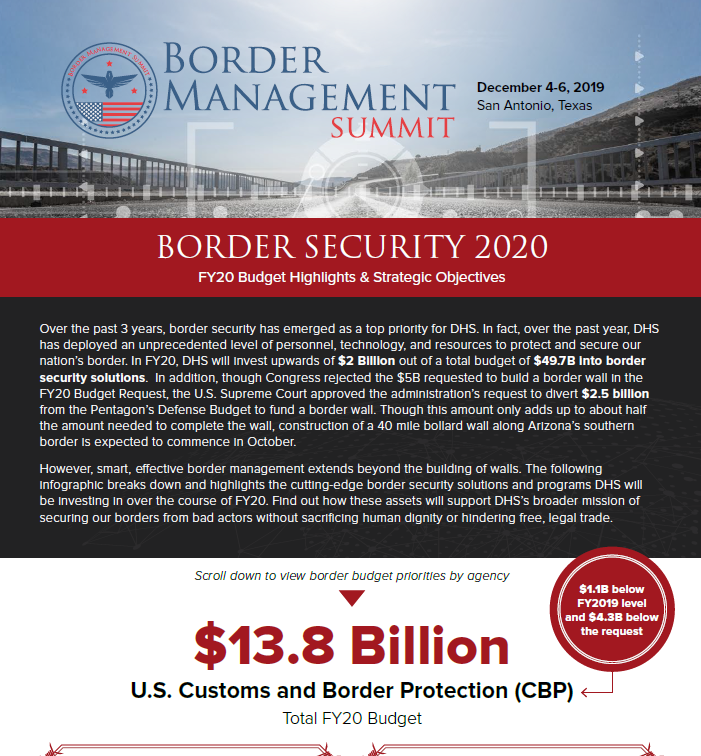 Over the past 3 years, border security has emerged as a top priority for DHS. In fact, over the past year, DHS has deployed an unprecedented level of personnel, technology, and resources to protect and secure our nation’s border. In FY20, DHS will invest upwards of $2 Billion out of a total budget of $49.7B into border security solutions. In addition, though Congress rejected the $5B requested to build a border wall in the FY20 Budget Request, the U.S. Supreme Court approved the administration’s request to divert $2.5 billion from the Pentagon’s Defense Budget to fund a border wall. Though this amount only adds up to about half the amount needed to complete the wall, construction of a 40 mile bollard wall along Arizona’s southern border is expected to commence in October.

However, smart, effective border management extends beyond the building of walls. The following infographic breaks down and highlights the cutting-edge border security solutions and programs DHS will be investing in over the course of FY20. Find out how these assets will support DHS’s broader mission of securing our borders from bad actors without sacrificing human dignity or hindering free, legal trade.