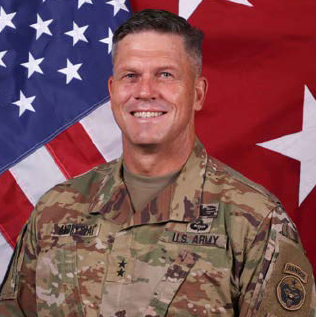 Prior to his present position as Commanding General, Major General Andrysiak served as the Chief of Staff, U.S. Army Pacific, Fort Shafter, Hawaii. As the Chief of Staff, he supervised, provided guidance for, and established priorities for the USARPAC staff. On behalf of the CG, he targeted and oversaw the daily operations, processes, policies, and procedures of the USARPAC Headquarters and staff.

Check out the incredible speaker line-up to see who will be joining Captain Earl “Keebs”.

11:15 AM Homeland Defense – An Alaska Perspective

Alaskan Command (ALCOM), a subordinate unified command of the U.S. Northern Command, plans and conducts homeland defense missions within the ALCOM Joint Operations Area (JOA), which is primarily comprised of the State of Alaska.  MG Andrysiak will provide insight as to how Alaskan Command is adapting to the changing military posture in the Arctic.
- Emerging trends in the North American Arctic
- Training opportunities:  Exercise ARCTIC EDGE
- Addressing shortfalls:  Arctic capabilities advocacy