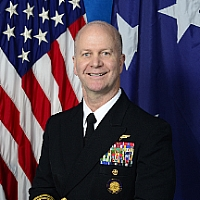 Vice Adm. Ross A. Myers is a native of Garden City, Kansas.  He graduated from Kansas State University with a Bachelor of Science in Accounting, the University of Kansas with a Master of Business Administration, and the National War College with a Master of Science in National Security Strategy.Myers, a career carrier naval aviator, has commanded at all levels of naval aviation including squadron, fleet replacement squadron, air wing, and carrier strike group and while a west coast Sailor has been stationed twice with Forward Deployed Naval Forces in Atsugi, Japan, including as commander, Carrier Air Wing Five.  He has flown over 4,600 hours in more than 17 different types of aircraft and over 1,000 arrested landings on 15 different aircraft carriers.Shore and staff tours include flag aide for Commander in Chief Allied Forces Southern Europe in Naples, Italy, and Commander in Chief, U.S. Naval Forces, Europe, London, England; joint assessments analyst and executive assistant for the Deputy Chief of Naval Operations (Resources, Warfare Requirements, and Assessments) N81; deputy executive assistant to the Chief of Naval Operations.Joint assignments include assistant deputy director for Global Operations, Joint Staff (J39); executive assistant to Vice Chairman, Joint Chiefs of Staff.  As a flag officer, Myers served as vice deputy director for Nuclear, Homeland Defense and Current Operations, Joint Staff (J33); director of Plans and Policy (J5) at Headquarters, U.S. Cyber Command; chief of staff at Headquarters, U.S. Cyber Command.Myers became the deputy commander at Headquarters, U.S. Cyber Command in May 2019.Myers has served on teams awarded the Joint Meritorious Unit Citation, Navy Unit Citation, Meritorious Unit Citation, and the Battle Efficiency “E” Awards.

Check out the incredible speaker line-up to see who will be joining Vice Admiral Ross A..