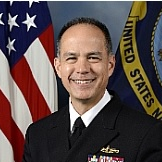 Rear Adm. Jon Hill is a native of Texas, born and raised on Fort Bliss. A surface warfare officer designated as an engineering duty officer, he is a graduate of Saint Mary’s University and earned a Master of Science in Applied Physics and Ordnance Engineering from Naval Postgraduate School.

He also served on the Joint Staff (J-6), U.S. Army Staff for Missile Systems, and as a senior fellow on the Chief of Naval Operations Strategic Studies Group. He served Missile Defense Agency (MDA) as technical director for AEGIS Ballistic Missile Defense then as AEGIS Combat Systems major program manager where he delivered Naval Integrated Fire Control and Counter Air and Integrated Air and Missile Defense capabilities to forces afloat.

Hill assumed duties as deputy director of the MDA in November 2016. He advises the director, MDA, in fielding the Ballistic Missile Defense System (BMDS) and manages MDA support to BMDS operational programs. Hill supports the development and implementation of BMDS policy, capabilities, priorities, and resources and serves as the operational interface with the Services, Combatant Commands, Joint Staff and allies.

Check out the incredible speaker line-up to see who will be joining RDML Jon.