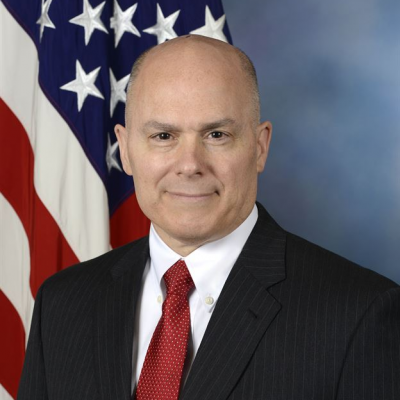 Mr. Kenneth P. Rapuano is the Assistant Secretary of Defense for Homeland Defense and Global Security. Previously Mr. Rapuano was a Senior Vice President at the ANSER Corporation, and the Director of the Studies and Analysis Group which provided multi-disciplinary studies and operational analysis for a broad array of government clients in the national security, homeland security areas. Up until November of 2016, Mr. Rapuano Directed the Homeland Security Studies and Analysis Institute (HSSAI), a Federally Funded Research and Development Corporation (FFRDC) operated by ANSER, a mission oriented not-for-profit organization. Prior to joining ANSER Mr. Rapuano was the Director of Advanced Systems at the MITRE Corporation. He was responsible for guiding crosscutting strategic national and homeland security mission initiatives, with particular focus on counterterrorism, intelligence, aviation security, crisis management/decision support, national preparedness, and CWMD. Previously, Mr. Rapuano served at the White House as Deputy Homeland Security Advisor to President George W. Bush from 2004-2006. He was responsible for managing the development and implementation of homeland security policies among departments and agencies, chaired the Homeland Security Council Deputies Committee, and co-chaired the White House Counterterrorism Security Group. He left the White House in 2006 to volunteer for deployment as a Marine Corps officer to Afghanistan with a Joint Special Operations Task Force, establishing and directing a targeting fusion center tracking high-value terrorists and insurgents. He also served in Iraq in 2003, commanding the Joint Interrogations and Debriefing Center of the Iraq Survey Group established to conduct the mission of surveying and exploiting possible weapons of mass destruction activities across Iraq. In 2003, Mr. Rapuano was appointed Deputy Under Secretary for Counter Terrorism at the Department of Energy, responsible for nuclear counter terrorism, homeland security, emergency response, and all related special access programs for DOE and the National Nuclear Security Administration. Previous to that, he was the National Security Advisor to the Secretary of Energy. Mr. Rapuano has also served as Special Assistant to the Assistant Secretary of Defense, International Security Policy. He served 21 years on active duty and in the reserves as a Marine Corps infantry officer and intelligence officer. Mr. Rapuano has also served as a Distinguished Research Fellow at the National Defense University’s Center for the Study of WMD, as a member of the Defense Science Board Task Force on the Role of DoD in Homeland Defense, the Pacific Northwest National Lab’s National Security Advisory Committee, the FBI’s Weapons of Mass Destruction Directorate Advisory Group, the DHS Quadrennial Homeland Security Review Advisory Committee, and the DHS Science and Technology Advisory Committee. Mr. Rapuano received a bachelor's degree in Political Science from Middlebury College, a master's degree in National Security Studies from Georgetown University, and has attended the Marine Corps Air-Ground Task Force Intelligence Officer Course at the Navy and Marine Corps Intelligence School.

Check out the incredible speaker line-up to see who will be joining Kenneth P..