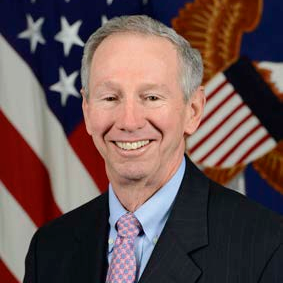 Under Secretary of Defense for Research and Engineering DoD

Dr. Michael D. Griffin is the Under Secretary of Defense for Research and Engineering. He is the Department’s Chief Technology Officer, and is responsible for the research, development, and prototyping activities across the DoD enterprise and is mandated with ensuring technological superiority for the Department of Defense. He oversees the activities of the Defense Advanced Research Projects Agency, the Missile Defense Agency, the Strategic Capabilties Office, Defense Innovation Unit, the DoD Laboratory enterprise, and the Under Secretariate staff focused on developing advanced technology and capability for the U.S. military.

Mike was previously Chairman and Chief Executive Officer of Schafer Corporation, a professional services provider in the national security sector. He has served as the King-McDonald Eminent Scholar and professor of Mechanical and Aerospace Engineering at the University of Alabama in Huntsville, as the Administrator of NASA, and as the Space Department Head at the Johns Hopkins University Applied Physics Laboratory. He has also held numerous executive positions in industry, including President and Chief Operating Officer of In-Q-Tel, CEO of Magellan Systems, and EVP/General Manager of Orbital ATK’s Space Systems Group. Griffin’s earlier career includes service as both Chief Engineer and Associate Administrator for Exploration at NASA, and as the Deputy for Technology at the Strategic Defense Initiative Organization. Prior to joining SDIO in an executive capacity, he played a key role in conceiving and directing several "first of a kind" space tests in support of strategic defense research, development, and flight-testing. These included the first space-to-space intercept of a ballistic missile in powered flight, the first broad-spectrum spaceborne reconnaissance of targets and decoys in midcourse flight, and the first space-to-ground reconnaissance of ballistic missiles during the boost phase. Mike also played a leading role in other space missions at the John Hopkins University Applied Physics Laboratory and NASA’s Jet Propulsion Laboratory.

Griffin has been an adjunct professor at the University of Maryland, Johns Hopkins University and George Washington University, teaching spacecraft design, applied mathematics, guidance and navigation, compressible flow, computational fluid dynamics, spacecraft attitude control, estimation theory, astrodynamics, mechanics of materials, and introductory aerospace engineering. He is a registered professional engineer in California and Maryland, and the lead author of some two dozen technical papers and the textbook Space Vehicle Design.

He is a member of the National Academy of Engineering and the International Academy of Astronautics, an Honorary Fellow and former president of the American Institute of Aeronautics and Astronautics, a Fellow of the American Astronautical Society, and a Senior Member of the Institute of Electrical and Electronic Engineers. He is the recipient of numerous honors and awards, including the NASA Exceptional Achievement Medal, the AIAA Space Systems Medal and Goddard Astronautics Award, the National Space Club’s Goddard Trophy, the Rotary National Award for Space Achievement, the Missile Defense Agency’s Ronald Reagan Award, and the Department of DoD Distinguished Public Service Medal, the highest award which can be conferred on a non-government employee.

Mike is a 4500+ hour commercial pilot and flight instructor with instrument and multiengine ratings, and holds an Extra Class Amateur Radio license.

Check out the incredible speaker line-up to see who will be joining Dr. Michael D..