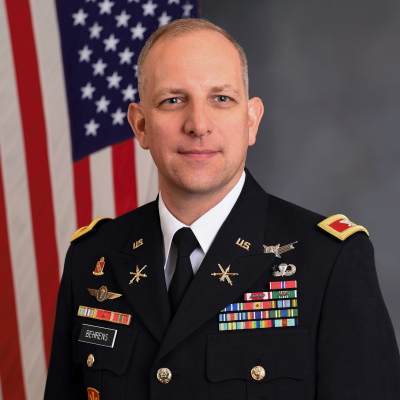 As a career Army Air Defense Artillery officer, Colonel Behrens has held leadership, staff and command positions from the platoon to general staff levels. He commanded the first Patriot Advanced Capabilities (PAC) 3, Configuration 3 battery in support of OPERATION SOUTHERN WATCH in Kuwait 2002, and later, OPERATION IRAQI FREEDOM beginning March 19th 2003. Colonel Behrens commanded A Detachment, 1st Space Company in Stuttgart, Germany and Doha, Qatar from 2003 to 2006.  Joint Tactical Ground Stations (JTAGS) provide theater missile early warning.  Colonel Behrens planned and coordinated the return of Army Integrated Air and Missile Defense (IAMD) to the Middle East as the Deputy Chief of Plans for the 32d Army Air and Missile Defense Command from 2006 to 2008 and, from 2008 to 2009, as the Operations Officer (S3) of the 11th Air Defense Artillery Brigade headquarters, the first to forward deploy to the Middle East since 2003.  There, he established the vision for the IAMD Center of Excellence in the United Arab Emirates to synchronize multi-national IAMD operations and security cooperation.  Colonel Behrens later commanded the 3d Battalion, 43d Air Defense Artillery while deployed to the U.S. Central Command theater of operations in 2014 in support of OPERATION ENDURING FREEDOM and integrated a forward deployed AN/TPY-2 missile defense battery. Upon redeployment, he integrated all five existing Terminal High Altitude Area Defense (THAAD) batteries at Fort Bliss, Texas into the battalion and supported multiple THAAD test and deployment operations. Colonel Behrens transitioned 3-43 ADA to assume responsibility of testing the Army’s newest distributive mission command capability, the Integrated Air & Missile Defense Battle Command System (IBCS).

Most recently, Colonel Behrens served as the Air Defense and Multi-Domain Task Force Organizational Integrator and Force Manager on the Army Staff in Washington, D.C. He developed the initial organizational and stationing concept for the return of the Army’s short-range air defense (SHORAD) capabilities, assisted in the permanent stationing of THAAD to Guam and the Republic of Korea, led Army IAMD planning in support of the European Deterrence Initiative, and established the Chief of Staff of the Army’s vision for Army capabilities in a Multi-Domain Task Force (MDTF) to counter adversary access denial strategies.  While at the U.S. Naval War College, Colonel Behrens researched and wrote on missile defense policy, counter anti-access and area denial strategies in the West Pacific, and Joint IAMD mission command.

Colonel Behrens holds a Bachelor of Science in Law Enforcement from Washburn University in Topeka, Kansas, a Master of Public Administration and National Security Policy from Troy University in Troy, Alabama, and a Master of National Security and Strategic Studies from the United States Naval War College in Newport, Rhode Island.  His professional schooling includes many Joint, Army and sister-service tactical, operational and strategic level courses and certifications.

He is married to Princess Kang Behrens, who has served the Army in multiple volunteer leadership positions at the battalion, brigade and installation levels. They have three exceptional children, Dylan, Tia and Amaya.

• The joint efforts and current priorities of the command

1500 JIAMDO’s overview of efforts and priorities

Check out the incredible speaker line-up to see who will be joining Colonel Tony.