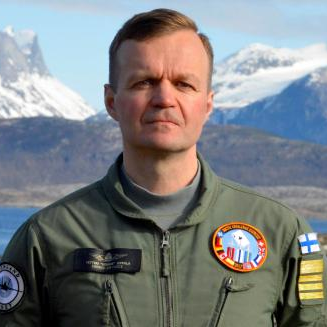 Defense, Military, Naval and Air Attaché of Finland for the United States and Canada, Embassy of Finland

Col Petteri Seppälä was born in the Arctic Circle in a town called Rovaniemi in 1969. He started his military career in 1988 as a conscript in the Finnish Defence Forces. After the military service he was accepted as a Cadet to the National Defence University and Air Force Academy. He graduated as an officer in 1993, and was promoted to the rank of Lieutenant at the same time.

He started his professional career in the Finnish Air Force in the Lapland Air Command, where he served as a fighter pilot, flight instructor and Chief of Operations Control Flight. He also executed the Flight Instructor Course, Unit Commander Course, Staff Officer Course, and General Staff Officer Course. He graduated as a GSO in 2007. He was promoted to the rank of Senior Lieutenant in 1994, Captain in 1999, and Major in 2006.

After the GSO Course he was appointed to the Commander of the Fighter Squadron 31 in the Karelian Air Command in 2007. During his time as a CO he also acted as the Detachment Commander of the Finnish Detachment in the Frisian Flag 2010 exercise. He was decorated with the Knight of the Order of the White Rose of Finland, 1st Class, and the Medal for Military Merits in 2007.

He was relocated to the Finnish Air Force Command in 2010. He served there as the Chief of Strategic Plans Section and the Deputy Chief of Air Force Plans in the Plans Division (A5). He also was the head planner of the Finnish Air Force reformation in 2010-2012. While serving in the A5, he completed the Higher Command Course (Low level) in the National Defence University in 2012. After his time in the Plans Division he was appointed to the Operations Division (A2/3) in 2013, where he served as the Chief of Air Force Operations.

Col Seppälä was selected to the United States Air Force Air War College in 2013, where he graduated as a Masters of Strategic Studies in 2014.

His next assignment was in the Finnish Defence Command. He served there as both in the Special Assignment and also as the Representative of the Commander of the Finnish Air Force. He also acted as a Secretary in the Preliminary Study Group in the Ministry of Defence, when Finland started to study the options to replace its F/A-18 fleet. He was promoted to the rank of Colonel in 2014.

Col Seppälä returned to the Finnish Air Force Command in 2015, when he was appointed the Director of the Air Operations Center Finland. While working as a Director of the AOC, Col Seppälä also acted as the National Lead of the Finnish delegation in the US Strategic Command led Nimble Titan Campaign 2014-2016. He was additionally the Exercise Director in the multinational Arctic Challenge Exercise 2017, the biggest air power exercise in Europe at the time. He completed both the National Collective Defence Course and also the Higher Command Course (High level) in the National Defence University in 2017.

After two years in the AOC Finland, Col Seppälä was appointed Commander of the Satakunta Air Command in 2017. As the Commander he was in responsible of the Finnish Air Force test flight and transportation flight operations. He was double hatted in his position, because he also was the Head of the Tampere Garrison at the same time. As the Head of the garrison he was in responsible for public relations and cooperation between the Defence Forces and the other sectors of the society in the region.

He started his current positon as the Defense, Military, Naval and Air Attaché of Finland for the United States and Canada in August 2019. He was decorated with both the Cross of Merit of the Finnish Air Force and also the Commander of the Order of the Lion of Finland in 2019.

Col Seppälä is married with Seija Seppälä. They have four children.

Check out the incredible speaker line-up to see who will be joining Colonel Petteri.