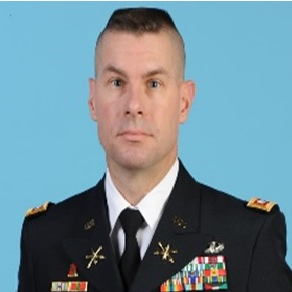 COL Skaggs is a 1991 graduate of Westminster College where he received a Bachelor’s of Science in Sociology and a ROTC commission into the United States Army, Air Defense Artillery.  He is a graduate of the Joint and Combined Warfighting School and the Army Force Management School.  He holds a Masters of Strategic Studies from the United States Marine Corps Senior Service College.

He and his wife Stacy, have been married for twenty-four years and they have two children; their daughter Morgan and son Walker.  The family currently resides in Huntsville, Alabama.

Check out the incredible speaker line-up to see who will be joining Chad.