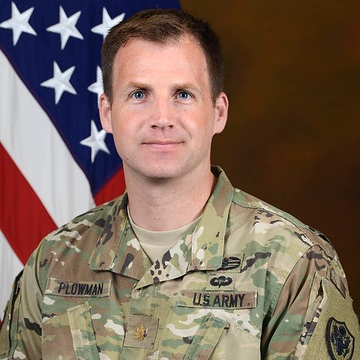 Major Clifford Plowman was born in Fairfax, VA and began his military service as a 37F Psychological Operations Specialist in the Army Reserve.  He attended Utah State University’s Reserve Officer Training Corps and was commissioned into the Utah National Guard as a Military Intelligence second lieutenant. He has served as a human intelligence team leader in southern Afghanistan, operations officer for USPACOM’s 2010 Angkor Sentinel mission in Cambodia, as well as commanded Delta Company, 142nd Military Intelligence Battalion.  Major Plowman began work at the Pentagon for the Headquarters, Department of the Army working data disclosures and breaches, and transitioned to establish the Army’s countering drone program. He is currently assigned to the Joint Staff, J-8 Force Protection Division where he continues to work counter drone efforts for the Department of Defense.

Major Plowman has a Bachelor of Arts degree in Political Science from Utah State University and a Masters in Business Administration from the University of Utah.  He previously worked at L-3 Communications as an Operations Program Manager for miniature unmanned system data links.  He is married to the former Jessica Clark from St. George, Utah and they have five children, Sierra, Celeste, Curtis, Travis, and Caleb.

Check out the incredible speaker line-up to see who will be joining Clifford.