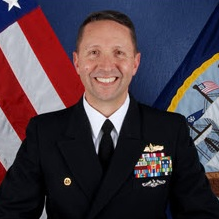 A native of Ansonia Connecticut, CAPT Stoner enlisted in the Navy in 1986.  Upon completion of Machinist Mate “A” School and the nuclear power training pipeline he served aboard the USS SKIPJACK (SSN-585), USS PROVIDENCE (SSN-719) and PCU SEAWOLF (SSN-21).  In 1995, then Chief Petty Officer Stoner, was commissioned at Officer Candidate School Pensacola FL, as part of the inaugural class of the Seaman to Admiral program.

Check out the incredible speaker line-up to see who will be joining Captain Dave.