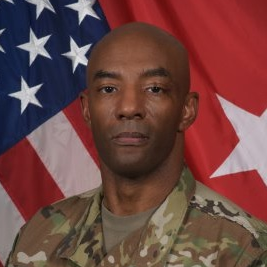 Brigadier General Sean A. Gainey graduated from Georgia Southern University in 1990 and was commissioned as a Second Lieutenant in the Air Defense Artillery. His professional military education includes the Air Defense Officer Basic and Advanced Courses, Command and General Staff College (CGSC), and Senior Service College at the Dwight D. Eisenhower School for National Security. He holds a Bachelors in Business Administration, an MS in Personnel Management from Central Michigan University and an MS in National Security and Resource Strategy from the Dwight D. Eisenhower School for National Security.

Check out the incredible speaker line-up to see who will be joining Sean.