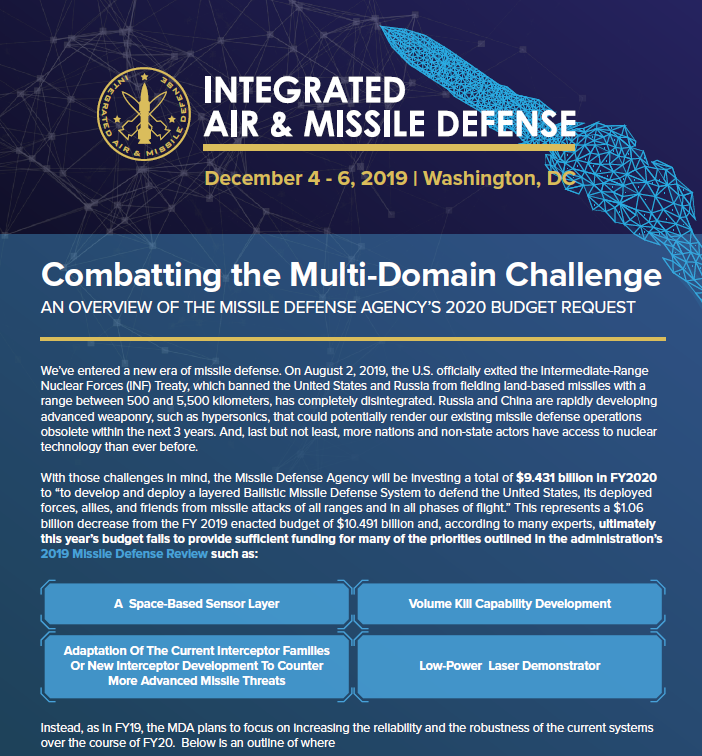 An overview of the Missile Defense Agency's FY20 budget request.

We’ve entered a new era of missile defense. On August 2, 2019, the U.S. officially exited the Intermediate-Range Nuclear Forces (INF) Treaty, which banned the United States and Russia from fielding land-based missiles with a range between 500 and 5,500 kilometers, has completely disintegrated. Russia and China are rapidly developing advanced weaponry, such as hypersonics, that could potentially render our existing missile defense operations obsolete within the next 3 years. And, last but not least, more nations and non-state actors have access to nuclear technology than ever before.

With those challenges in mind, the Missile Defense Agency (MDA) will be investing a total of $9.431 billion in FY2020 “to develop and deploy a layered Ballistic Missile Defense System to defend the United States, its deployed forces, allies, and friends from missile attacks of all ranges and in all phases of flight.” This represents a $1.06 billion decrease from the FY 2019 enacted budget of $10.491 billion and, according to many experts, ultimately this year’s budget fails to provide sufficient funding for many of the priorities outlined in the administration’s 2019 Missile Defense Review.

Instead, as in FY19, the MDA plans to focus on increasing the reliability and the robustness of the current systems over the course of FY20. DOWNLOAD our infographic to find out: